When medicine meets marketing: turmeric tea and other ‘wonder herbs’

Wouldn’t it be fantastic if a cup of tea could cure all that ails you? I mean really cure you, not just improve your general mood and act as a satisfying accompaniment to a biscuit or two. 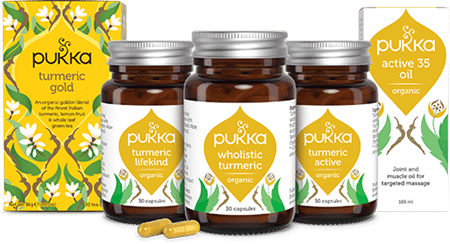 Recently I saw these being promoted online with some pretty big health claims attached. The claims related to the main ingredient turmeric and included powers to;

Impressive no? At least 3,300 fellow Instagrammers thought so. Unsurprisingly PukkaHerbs agreed, calling turmeric an ‘incredible super herb’. But is there actually any evidence for these effects? And if there is, what sort of dose would be needed to produce them? Or, how many cups of tea will I need to drink to see a meaningful difference in my acne?

Turmeric and Acne: the evidence

Has turmeric even been studied as a treatment for acne? Yes in fact, it has. On the 23rd of May a systematic review was published on the effects of turmeric on skin health. This would usually be a promising source of evidence as systematic reviews attempt to provide a complete synthesis of all of best quality research available to answer the question at hand. Sadly the authors were only able to identify one randomised, double blind, controlled trial related to acne and turmeric. The study compared four groups of participants between the ages of 13 – 30, half of whom took capsules with active ingredients and used either a gel or cream based topical treatment, the other half used nothing topically but were then divided into groups taking either capsules with active ingredients or placebo. Ultimately, the groups taking only capsules (either turmeric or placebo) failed to show a substantial improvement in their acne.  Problematically we have no idea of the actual dose used in the active capsules and the trial itself ran only for 4 weeks. This is an exceptionally short course, as anyone who has sought professional treatment for acne would know.

Is there a magic dose?

Could it be that in the study mentioned above, participants simply weren’t taking enough of the active ingredient? An important factor in the effectiveness of any medication is its bioavailability, meaning the amount of active ingredient found in the bloodstream in comparison to the amount ingested. When considering bioavailability and turmeric, the molecule of most interest is curcumin, widely studied on the basis that it is the most likely source of biological activity in the body.

Since there is no dose related information on the box of tea, I contacted the manufacturer and they told me:

“We can confirm that there is 0.72g of Turmeric root per every sachet of Turmeric Gold Tea.”

I also asked if they had tested for the presence of curcumin and how much is actually present in each cup of tea when brewed. They hadn’t and didn’t know (this is likely because curcumin is highly insoluble).  Fortunately, Pukka have done slightly more testing of their supplement. According to their ‘Pukkapedia’ resource, two capsules are claimed to provide 155mg of curcumin and 55ml of turmeric essential oils. So, is 155mg of curcumin enough? Well in this study, participants had to take at least 10,000mg or more of curcumin at a time for it to later be detectable in blood tests. This is the equivalent to consuming just over two bottles of ‘Whole Turmeric Capsules’ in one sitting. At £15.95 each, that’s quite an investment for uncertain returns.

The poor bioavailability of curcumin has been known about for some time and various techniques to improve bioavailability have been explored. These include adding piperine, extracted from black pepper, or phospholipids (fats), or using a mixture of curcuminoids and volatile oils. Some of these strategies have been compared here, although beware that this is a very, very small trial with a maximum of four participants per group.

Yet you don’t need to be a research scientist to question health claims. One switched-on instagram commentator notes that traditionally turmeric is never prepared as a tea or eaten alone as it needs fat to be properly absorbed. She suggests instead that it might be useful to use a solution of tea topically to treat active acne although we now know that there is unlikely to be any curcumin in your cup!

So, how can we better tune our health skeptic when faced with the power of marketing?

Often, it is a case of looking beyond the product to see what the kind of information is being provided by those with a vested interest in selling something to you. On the same page as their ‘science-y’ HPTLC image and their video assuring us that turmeric is “a powerful antioxidant” Pukka’s interesting facts section gives us the following:

“Another little gem is that India consumes the highest levels of Turmeric in the world at about 1g per person per day, usually with other spices with food. Interestingly India also has some of the best health outcomes in the world today as well.”

While health outcomes in India have been improving over time, it cannot be said that these are up with the best in the world. For example, the World Health Organization’s Global Health Observatory individual statistical profile indicates that healthy life expectancy at birth is still only 57 in India. Compare this to 71 in Norway, where notably, turmeric consumption is negligible.

We also have Pukka’s support of the Alliance for Natural Health, who have current campaigns against fluoridation and chlorination under the premise of ‘Clean Drinking Water’. Such energies may be better devoted to the communities where Pukka source their raw turmeric, given that 92 million people in India were without access to a source of improved (clean) drinking water in 2012 (source UNICEF).

Finally, in the spirit of full disclosure, I have a packet of Pukka tea in the cupboard at home and another in my drawer at work. They are caffeine free and taste delicious but I don’t expect them to cure me of anything. It’s a cup of tea, not a miracle in a tiny packet. So enjoy it for what it is, not what it is claimed to do, and pass that biscuit tin….

Sarah McNeill is a Postgraduate Scholar at the Australian National University.