COVID-19: The Chain Ladder Method for estimating deaths not yet reported.

NHS England releases daily, the number of deaths reported in Hospitals. Most of these reported deaths occurred in the previous week but some occurred more than a week ago – in some cases a month can elapse before they are reported.

This means that the counts of deaths are always an underestimate of the number of people who have died up to date of reporting. The difference between what the final estimate will be on any given date and the current figure can be defined as the deaths that have Occurred but not yet Reported (OBNR). This could be a useful measure in monitoring the ongoing pandemic as well as providing a better indication of recent trends.

The OBNR can be estimated using a technique called the Chain Ladder. This is used by actuaries  to estimate incurred but not reported claims by using patterns of past claims.

The principle behind the Chain Ladder method is to use the way in which the counts have accumulated in the past to predict how they will be reported in the future and to fill in the missing (future) values.

Arrange the cumulative counts of death by date of death in a spreadsheet, with rows corresponding to the date of death, and the delay (in days) in reporting for the columns. Table 1 shows the top right-hand corner of such a spreadsheet. The cells represent the total number of deaths reported for a specific date for 1 to 30 days later.

However, the count after 30 days (602) is also probably an underestimate because in rare cases the delay in reporting can exceed a month. We should anticipate this number will also eventually be higher than the current figure. For simplicity, based roughly on the observed numbers of such cases, we have assumed this inflation factor to be 0.8% for all days > 30. If follows then, that the day 29 inflation factor should be 0.8% * 0.17% = 1.0%. This is the chain in the Chain Ladder method.

Starting from the right-hand corner of the spreadsheet we create a cumulative inflation factor in a chain all the way through to the left-hand side of the sheet. The table shows how these calculations would look for the first five days of April.

Occurred but not reported (OBNR)

We have projected COVID-19 Deaths in English Hospitals for the whole month of April 2020 using the Chain Ladder method (see figure 1). 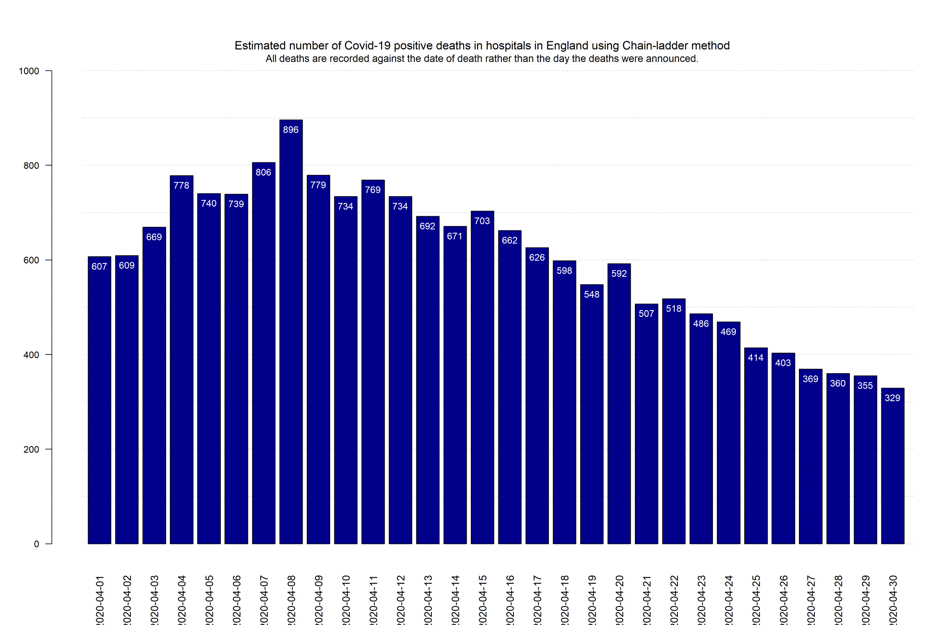 The latest estimate of cases in the reporting pipeline is now just below 1,500 deaths with the standard error of around 120 deaths. Based on a stochastic version of the Chain Ladder using Bootstrap resampling (England & Verrall 1999) the upper bound of the 90% confidence interval for the OBNR is around 1,650 deaths.  As the results clearly indicate, with a consistent reduction in ultimate daily hospital deaths the OBNR figure is expected to decrease further. In anticipation of this, we intend to update this analysis once a week.

As mentioned above we used a non-parametric bootstrap technique (England & Verrall) to get an estimate also of the reliability of the most recent days. Table 3 shows the mean OBNR over all bootstrap samples, with standard errors and the upper bound of the 90% confidence interval estimated from the percentiles of the bootstrap samples for the last five days of April.

As we would expect there is greater uncertainty around the most recent estimates.

We have also not made any allowance for day effects such as the fact that registrars offices are closed on Saturday/Sunday and deaths occurring on these days are subject to reporting delays. In addition, we have not accounted for the changes in the rules surrounding the completion of the death certificate following the Coronavirus Act 2020 (see here).

For the uncertainty estimates for specific days we have assumed that the reporting pattern over the last ten or so days is consistent over this period and changes may have a significant impact on these projections. Patterns for COVID-19 Deaths in Care Homes and in the Community may well have different patterns of reporting and the same applies for deaths in Wales, Scotland and Northern Ireland.

The most recent days estimates now show a consistent pattern and the number of late reported cases are reducing as the overall volumes of daily deaths have reduced at least in these hospitals.  Using this method, the upward trend to the peak of the 8th April is just under 38 deaths per day and the daily reduction since then is a fairly steady drop of just over 23 cases per day. Our finding suggests that deaths occurring in April will continue to be reported in May and add to the  number of deaths already recorded from the pandemic.

With thanks to Richard Kelsey for commenting on the manuscript.