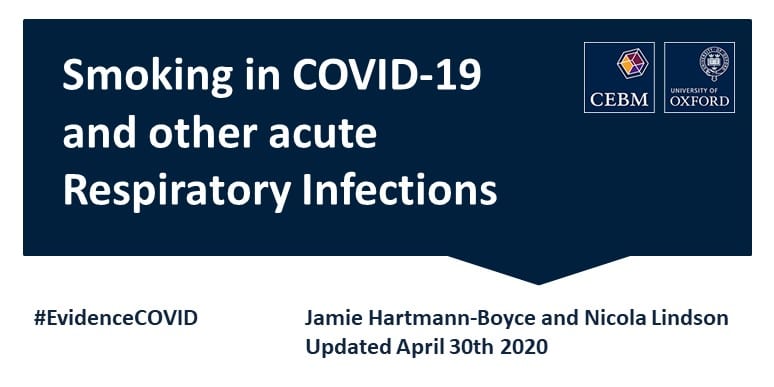 VERDICT
Smoking is a known risk factor for acute respiratory infections in general, both for people who smoke and those around them. Data on COVID-19 is still emerging, with contradictory evidence regarding whether people who smoke are at greater or reduced risk from COVID-19. Smoking cessation support increases quit rates and is available remotely.

BACKGROUND
Smoking is a known risk factor for acute respiratory infections in general, and many public health bodies have encouraged people who smoke to quit in light of the COVID-19 pandemic (including Public Health England and the World Health Organization). However, contradictory evidence and news stories are emerging related to the possible role of smoking in COVID-19. Below we cover the evidence on the relationship between smoking status and COVID-19 (new to this update). As this evidence is emerging and very limited, we also briefly summarise evidence on smoking and acute respiratory infections (ARI) more broadly . Finally, we review effective interventions for quitting smoking which are feasible within the current pandemic context.

CURRENT EVIDENCE
Are smokers at greater risk from COVID-19?

The WHO have identified tobacco smoking as a risk factor for becoming infected with COVID-19, and for more severe COVID-19 related outcomes. Smoking can cause or exacerbate co-morbid conditions such as cardiovascular and respiratory diseases and diabetes. Evidence shows that comorbidities such as cardiovascular disease, respiratory conditions, and diabetes all increase risk of serious complications and death from COVID-19.

Some studies have suggested that smokers are at lower risk of getting coronavirus and of getting severely ill when they do catch it, and others have found the reverse (see Lippi et al, Berlin et al, Vardavas et al, Farsalinos et al). A living rapid evidence review of observational studies looking at the correlation between smoking status and infection, hospitalisation and mortality due to COVID-19, shows issues with the current data. Of the 28 included studies only three explicitly recorded or reported on ‘never smoking’ status, meaning that we cannot be sure that those not coded as ‘smokers’ were actually non-smokers. In addition those meta-analyses that could be carried out suffered from imprecision due to low numbers of events. One meta-analysis of two studies (N = 1370) showed some evidence that smokers were more likely to suffer severe disease as a result of COVID-19, but this evidence was classed as low certainty. This means that the conclusions drawn are likely to change as a result of new evidence. As a result of the studies that have shown evidence of a seemingly protective effect of tobacco smoking, researchers in France have recently launched a study testing the use of nicotine replacement therapy (NRT) as a treatment for COVID-19.

Is there any reason to think nicotine could be protective?

As discussed above, researchers in France have recently launched a study testing the use of nicotine replacement therapy (NRT) as a treatment for COVID-19. Although smoking is a known risk factor for many chronic illnesses, such as cancers, chronic obstructive pulmonary disease (COPD), cardiovascular diseases (CVD) and pneumonia, nicotine has been found to have immunomodulatory effects. Patients with ulcerative colitis who begin smoking have been found to go into remission, and a Cochrane Review found evidence that nicotine patches were an effective treatment for ulcerative colitis, by increasing the likelihood of remission. Therefore, there is a possibility that nicotine could work in a similar way in different medical conditions.

It is important to note that nicotine, though the addictive substance in cigarettes, is not the chemical which directly causes the myriad of harms associated with smoking. Nicotine replacement therapy is a widely available, affordable medication which is considered safe when used as instructed.

Does smoking increase the risk of acute respiratory infections in general?

There is no data on this relating to COVID-19. Evidence shows that quitting smoking during other acute respiratory infections reduces the risk of developing serious complications such as bronchitis and pneumonia. Even if someone has smoked for decades, quitting smoking can lead to almost immediate improvements in the cardiovascular and respiratory system. Within one to two days of quitting smoking, positive effects can be observed in blood pressure, heart rate, vasoconstriction, and oxygen levels.

There is no direct evidence with which to answer this question. According to the WHO, tobacco users are less likely to become infected with COVID-19  if they quit smoking as it will reduce hand-to-mouth transmission. In addition, as well as the near-immediate improvements to the cardiovascular and respiratory systems outlined above, comorbidities such as cardiovascular conditions, lung conditions, and diabetes can improve very soon after quitting smoking. As noted above, these comorbid conditions increase the risks of COVID-19.

Even though options for face-to-face support and prescription medications may be limited in the current COVID-19 outbreak, there is abundant evidence for the effectiveness of other forms of smoking cessation support. Nicotine replacement therapy  (in the form of patches, gum, lozenges, and sprays) increases the chances of long-term smoking cessation by approximately 50% and is considered safe to use, even during lapses to smoking. Nicotine replacement therapies are widely available in supermarkets and pharmacies. Evidence from randomized controlled trials shows that using two forms of nicotine replacement therapy at the same time (a patch plus a faster-acting form like gum or lozenge) increases the chances of quitting compared to a single form and is as effective as prescription stop-smoking medications.

Quitting smoking can be stressful, but there is evidence that quitting smoking leads to improvements in mental health. There is evidence that cutting down to quit  (gradually reducing cigarette consumption) is as effective for long-term smoking cessation as stopping abruptly. However, there is no evidence to suggest that reducing without quitting is beneficial. It is safe to use nicotine replacement therapy whilst reducing smoking and evidence suggests that using a fast-acting form (e.g. gum or lozenges) to replace cigarettes whilst reducing can increase the chances of success. 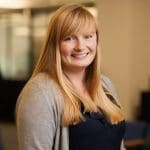 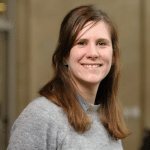 REFERENCES
All references are hyperlinked above.