Tip for data extraction for meta-analysis – 6

How do you calculate a standard error of a beta coefficient?

I have shown how to rescale hazard ratios (HRs) to a common change in a predictor variable, and also beta coefficients which are HRs (natural) log-transformed. We need to enter beta coefficients and their standard errors (SEs) into meta-analysis software. In this post I’ll show how to calculate these SEs.

A bit of maths (see below if you’re interested) shows us: 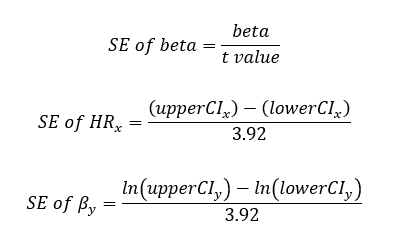 Let me show you some examples. Returning to the studies mentioned in my previous post. I had already scaled them to a 5mmHg increase in systolic blood pressure variability:

study by Mancia et al has a beta coefficient of -0.092 and its

study by Hansen et al has a beta coefficient of 0.01 and its

study by Pringle et al has a beta coefficient of 0.16 with its

In my next post I will show how to pool data from studies reporting categorical risk data with different numbers of categories and different thresholds.

This can be rearranged to

A 95% confidence interval is

This equation applies to any symmetric 95% confidence interval.

Rescaling beta coefficients from a change of x units to y units in the predictor variable,

The same applies for

which follows on from the explanation given for