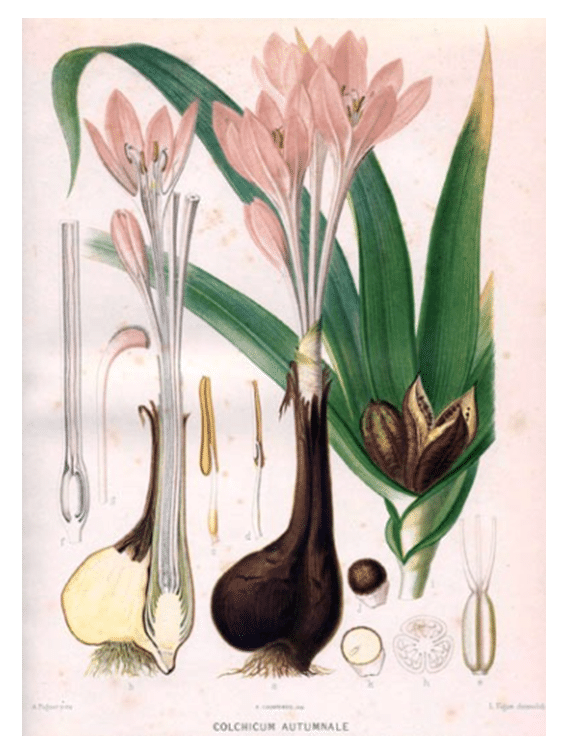 Colchicine is an alkaloid present in all parts of the autumn crocus, Colchicum autumnale. It has been used therapeutically since the first half of the 19th century.

Colchicine has also been used in the treatment of acute pericarditis, familial Mediterranean fever, and Behçet’s disease.

Mode of action
The mode of action of colchicine in gout is not known. A plausible explanation is that it inhibits migration of phagocytes to gouty tissues and thereby prevents both phagocytosis of urate crystals and the subsequent increase in local lactate release following phagocytosis, which lowers the pH and leads to further urate deposition. However, colchicine has other anti-inflammatory actions, including inhibition of cellular microtubular function and inhibition of the NLRP3 inflammosome complex. This can result in suppression of secretion of interleukins, including IL-1b, IL-6, and IL-18.

Colchicine should not be used in pregnancy or during breastfeeding.

Kinetic data
Colchicine is rapidly and well absorbed after oral administration. Although it is said to have a short half-life (3–10 h), in leukocytes it may be detectable for several days after a single dose, and clearly tissue accumulation occurs.

Colchicine is mostly metabolized (80%) in the liver and its metabolites are excreted in the bile.

Drug–drug interactions
Colchicine is a substrate for both CYP3A4 and P glycoprotein. It should not be used in patients taking drugs that inhibit those systems, such as macrolide antibiotics, ciclosporin, antifungal imidazoles, HIV protease inhibitors, some calcium channel blockers (verapamil and diltiazem), and disulfiram.

Retrospective studies
In a small retrospective database study from Israel early in the pandemic, the characteristics of 1317 patients positive for SARS-CoV-2 infection were compared with those in 13,203 negative patients. The rates of positivity were no different from average in those patients who took either hydroxychloroquine or colchicine long-term (Table 1). Hydroxychloroquine is ineffective in COVID-19.

GRECCO-19
GRECCO-19 was a small prospective, open, randomized clinical trial comparing the effects of standard care with the effects of colchicine (1.5 mg once, 0.5 mg at 1 hour, then 0.5 mg twice daily for up to 3 weeks, i.e. a total of 23 mg) in patients admitted to hospital with symptoms and signs of COVID-19 and PCR positive tests for SARS-CoV-2 (Table 2). Those who had a QT interval of 450 milliseconds or more, liver failure, or colchicine sensitivity, or were pregnant or breast-feeding were excluded, as were those deemed to need “ventilatory support”.

The co-primary end-points in the biochemical phase were the difference in maximal concentrations of high-sensitivity cardiac troponin (hs cTn) between the two groups and the time for C-reactive protein to reach values more than three times the upper limit of the reference range (not subsequently analysed).

The primary end-point of the clinical phase was the time from baseline to clinical deterioration, defined as a 2-grade increase on an ordinal clinical scale.

The results are shown in Table 3.

The authors concluded that “participants who received colchicine had statistically significant improved time to clinical deterioration [sic] compared with a control group that did not receive colchicine. However, the observed difference was based on a narrow margin of clinical significance; these observations should therefore be considered hypothesis generating.” 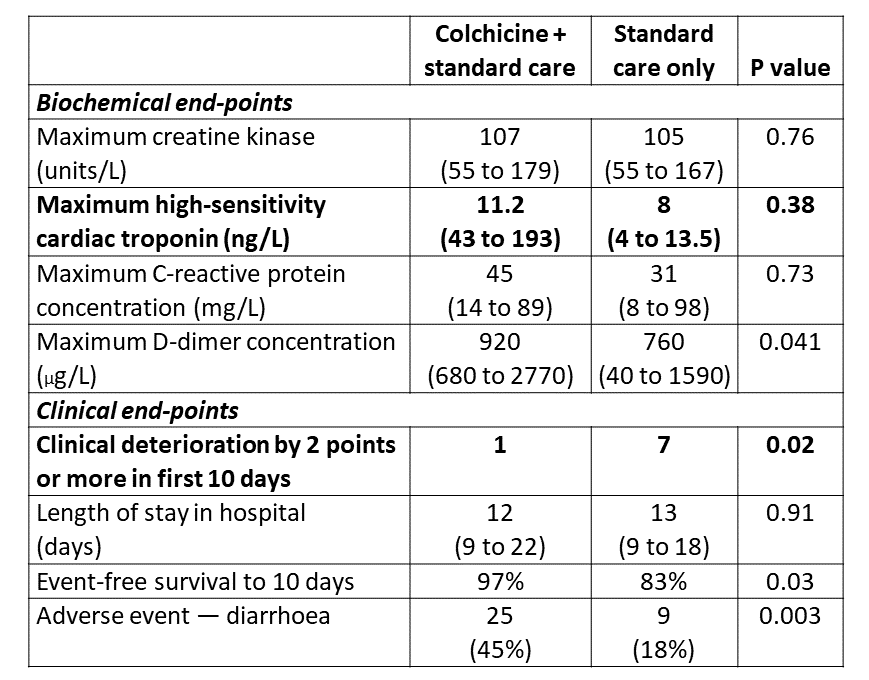 This was a small open study with some baseline differences between patients in the two arms. The number of patients recruited was nearly 40% less than the 180 patients stipulated in the (amended) protocol.

The original hope was that colchicine would reduce cardiac damage from SARS-CoV-2, but this was not demonstrated.

The authors were suitably cautious in suggesting that the results are “hypothesis generating”.

COLCORONA
An international clinical trial, with a protocol that was published in March 2020, sought to establish whether colchicine given in early COVID-19 could reduce the chance of hospitalization or death. The COLCORONA trial set out to recruit 6000 patients with at least one risk factor, in whom COVID-19 had been diagnosed outside hospital within 24 hours of recruitment. Patients were randomized 1:1 to 30 days of treatment with colchicine (500 micrograms twice daily for three days, then once daily for 27 days, i.e. a total of 16.5 mg) or placebo. Recruitment began in March 2020.

A press release published on 23 January 2021 announced that the trial showed that “colchicine has reduced by 21% the risk of death or hospitalizations in patients with COVID-19 compared to placebo.” A preprint of the study has now been published.

Methods
The preprint describes the trial as “double-blind”, as did the first version of the protocol, published on 20 March 2020, and all subsequent versions. However, the same protocol (version 1) described masking as “Single (Participant)”. This was not changed, despite subsequent amendments, until 13 November 2020 (version 11), when masking was described as “Triple (Participant, Care Provider, Investigator)”.

The diagnosis of COVID-19 was made in one of three ways:

Patients were excluded if they were already taking colchicine or had inflammatory bowel disease, severe hepatic or renal impairment, or certain other conditions (set out in a Supplement that is not readily available).

Evaluation was made by telephone 15 and 30 days after recruitment.

A prespecified analysis of those with positive PCR tests was also made, and other subgroup analyses were conducted using logistic regression models.

While not mentioned in the protocol, the preprint states that a “pre-specified stopping rule for efficacy was based on the Lan-DeMets procedure with the O’Brien–Fleming alpha-spending function” — statistical procedures that allow for interim analysis. In fact, the decision to halt the study after recruitment and follow-up had reached 75% of the planned numbers was made “due to logistical issues related to maintaining the central study call center active 24 hours per day for a prolonged period of time, as well as the need to provide healthcare systems with study results in a timely fashion given the state of the COVID-19 pandemic.” The level of statistical significance was adjusted by 0.001 to 0.049 “to account for the interim analyses”. There was no adjustment for multiple comparisons.

Table 4. Data at entry into COLCORONA

Outcomes
The primary and planned secondary outcomes in the entire population and in those with positive PCR tests were as shown in Table 5. 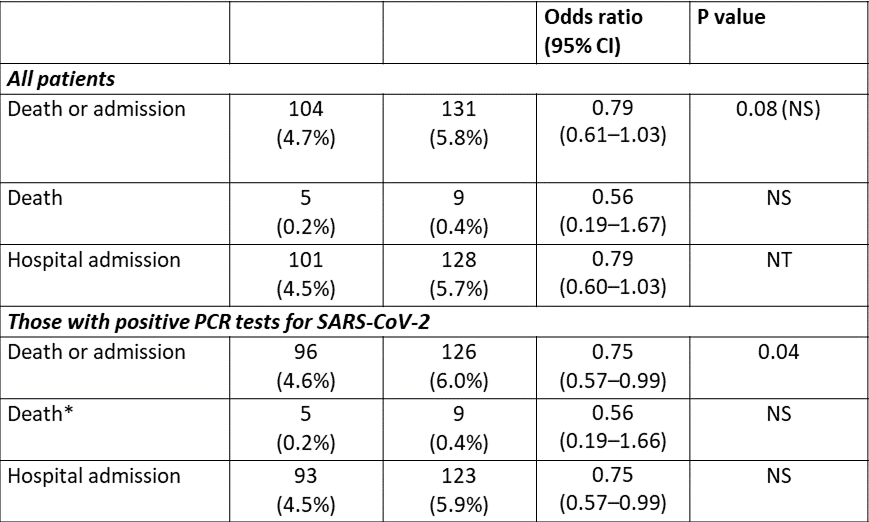 Colchicine in hospital in-patients
The effects of colchicine in hospitalized patients with moderate or severe COVID-19, confirmed by RT-PCR and CT lung changes but not already requiring ICU admission, have been studied in a small randomized, double-blind, placebo-controlled Brazilian study. A preliminary report of the results in 38 patients was posted in medRxiv on 11 August 2020 and a second version a day later. Some of the details in these versions differed from those in the final report.

Patients who weighed under 80 kg were given colchicine in doses of 500 micrograms three times daily for 5 days, then 500 micrograms twice daily for a further 5 days (i.e. a total of 12.5 mg). In those who weighed 80 kg or more, a loading dose of 1 mg was given. All received standard care with azithromycin, hydroxychloroquine, and unfractionated heparin; part way through the study methylprednisolone was added.

The primary endpoints were rather diffusely defined as “clinical parameters, such as the time of need for supplemental oxygen; time of hospitalisation; need for admission and length of stay in ICU; and death rate and causes of mortality.” Laboratory results were was also assessed, as were adverse events, including the frequency of QT interval prolongation beyond 450 ms.

Selected results from the trial are shown in Table 6. 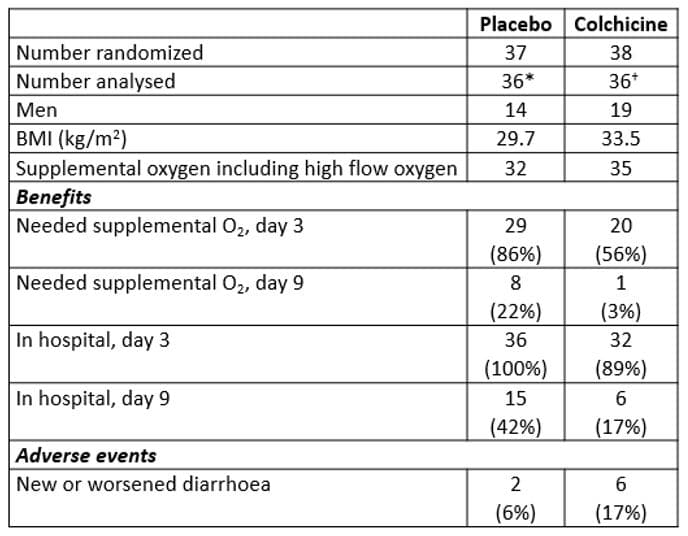 Comments
This was a very small trial.
The primary endpoints were poorly specified.
Deaths and ICU admissions yielded too few events for statistical analysis.
The trial departed from one published protocol, but more closely followed another.
Diarrhoea again emerges as an adverse event associated with colchicine.

The authors concluded, reasonably, and as authors of small trials so often do, that “Clinical trials with larger numbers of patients should be conducted to further evaluate the efficacy and safety of colchicine as an adjunctive therapy for hospitalized patients with moderate to severe COVID-19.”

Registered trials of colchicine in COVID-19
We currently know of 36 registered trials involving colchicine, alone or in combination with other treatments, of which 35 are randomized and 21 are recorded to be recruiting. Twenty-five are not masked (mostly described as “open label”); two are single-blind (participants only), five double-blind, two triple-blind, and one quadruple-blind. Of the trials that are recruiting and have declared the number of subjects they aim to enrol, four specify under 100 subjects, six between 100 and 1000, and two over 1000. Taking all the trials, the total number of participants proposed to be enrolled in double-, triple-, or quadruple-blind trials is 6994 (22%) out of a total of 32,097.

Outlook
The efficacy of colchicine in patients with mild or moderate COVID-19 remains uncertain after these inconclusive studies. Adverse effects from treatment with colchicine for a month are significant, and the total doses that have been used are very high. Until better evidence emerges, colchicine is better reserved for use in randomized studies.