Who first described them; why they are called coronaviruses; what they are; how they invade cells; how we detect them

Until recently, most people will never have heard of coronaviruses. But they, and the diseases they cause in humans and animals, have been recognized for over 50 years.

In 1951 Gledhill & Andrewes isolated a hepatitis virus from mice, now also known to be a coronavirus.

In 1965, the virologist David Tyrrell, Director of the Medical Research Council’s Common Cold Research Unit at Harnham Down near Salisbury in Wiltshire, and his colleague Mark Bynoe published a paper in the British Medical Journal, in which they described a virus, which they called B814, and identified it as a cause of the common cold. They tried to characterize other viruses, but without much success, and thought that viruses of which they found evidence were rhinoviruses.

On 1 April 1967 Tyrell, this time with his colleague June Almeida, from the Department of Medical Microbiology in London’s St Thomas’s Hospital Medical School, identified three uncharacterized respiratory viruses, of which two had not previously been associated with human diseases. They reported that two of the viruses, 229E and B814, of which they published electron micrographs, were indistinguishable from the particles of avian infectious bronchitis.

Then Almeida and Tyrell, with six other colleagues, reported in Nature in 1968 that there was a group of viruses that caused not only avian bronchitis but also murine hepatitis and upper respiratory tract diseases in humans, as shown in Figure 1, taken from their brief annotation, which was published under the general heading “News and Views” (Almeida JD, Berry DM, Cunningham CH, Hamre D, Hofstad MS, Mallucci L, McIntosh K, Tyrrell DAJ. Virology: Coronaviruses. Nature 1968; 220(5168): 650). This is the first recorded instance of the term “coronaviruses”.

The virus of avian infectious bronchitis is classified as a gammacoronavirus, while most of the coronaviruses that infect humans are betacoronoviruses. The human coronavirus HCoV-229E described by Almeida and Tyrrell is an alphacoronavirus. 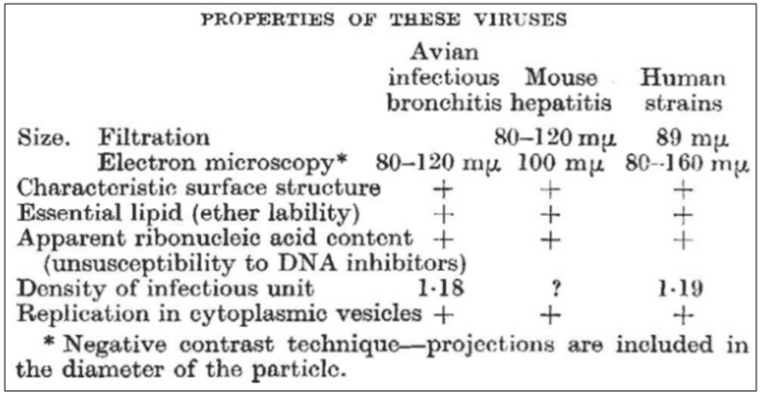 Figure 1. Details of the properties of coronaviruses, first published in Nature (1968; 220(5168): 650); David Tyrrell, at the Common Cold Research Unit, Salisbury, Wiltshire, offered to provide a short bibliography to anyone interested in the data on which the table was based

Why are they called coronaviruses?

As the journal Nature reported in 1968, “these viruses are members of a previously unrecognized group which [the virologists] suggest should be called the coronaviruses, to recall the characteristic appearance by which these viruses are identified in the electron microscope.”

The word “corona” has many different meanings (see Appendix 2). But it was the sun that the virologists had in mind when they chose the name coronaviruses. As they wrote, they compared “the characteristic ‘fringe’ of projections” on the outside of the virus with the solar corona (not, as some have suggested, the points on a crown). Figure 2 illustrates this.

Figure 2. Left: The virions of coronaviruses; Right: The corona of the sun seen during an eclipse


What are coronaviruses and how do they invade cells?

Coronaviruses are single-stranded RNA viruses, about 120 nanometers in diameter. They are susceptible to mutation and recombination and are therefore highly diverse. There are about 40 different varieties (see Appendix 1) and they mainly infect human and non-human mammals and birds. They reside in bats and wild birds, and can spread to other animals and hence to humans. The virus that causes COVID-19 is thought to have originated in bats and then spread to snakes and pangolins and hence to humans, perhaps by contamination of meat from wild animals, as sold in China’s meat markets.

The corona-like appearance of coronaviruses is caused by so-called spike glycoproteins, or peplomers, which are necessary for the viruses to enter host cells. The spike has two subunits; one subunit, S1, binds to a receptor on the surface of the host’s cell; the other subunit, S2, fuses with the cell membrane. The cell membrane receptor for both SARS-CoV-1 and SARS-CoV-2 is a form of angiotensin converting enzyme, ACE-2, different from the enzyme that is inhibited by conventional ACE-1 inhibitors, such as enalapril and ramipril.

Briefly, the S1 subunit of the spike binds to the ACE-2 enzyme on the cell membrane surface. A host transmembrane serine protease, TMPRSS2, then activates the spike and cleaves ACE-2. TMPRSS2 also acts on the S2 subunit, facilitating fusion of the virus to the cell membrane. The virus then enters the cell. Inside the cell the virus is released from endosomes by acidification or the action of an intracellular cysteine protease, cathepsin.

A model and a more detailed description of these events is shown in Figure 3. 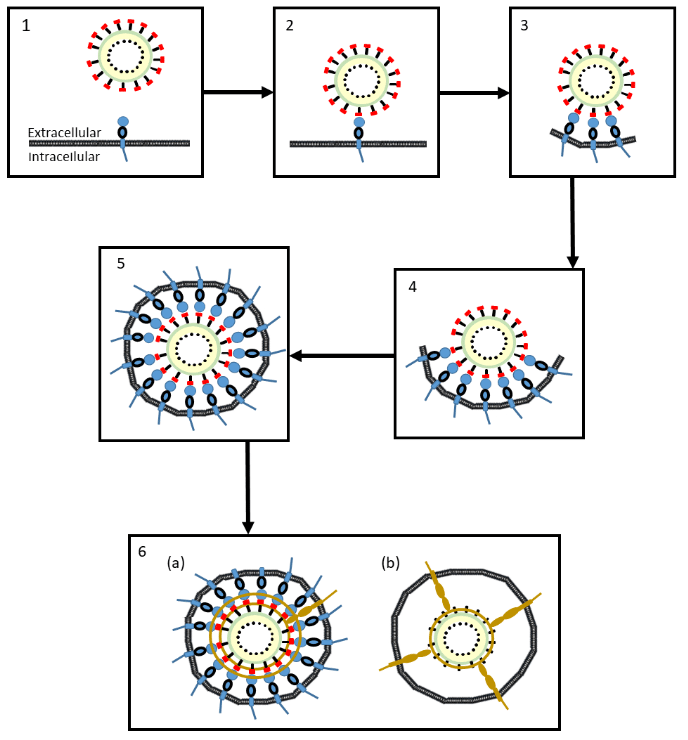 (a)    A cell membrane-bound serine protease (brown), TMPRSS2, cleaves the virus’s S1 subunits (red) from its S2 subunits (black) and also cleaves the ACE-2 enzymes; the endosome enters the cell (endocytosis), where the virus is released by acidification or the action of another protease, cathepsin

(b)    The same serine protease, TMPRSS2, causes irreversible conformational changes in the virus’s S2 subunits, activating them, after which the virus fuses to the cell membrane and can be internalized by the cell

A serine protease inhibitor, camostat mesylate, used in Japan to treat chronic pancreatitis, inhibits the TMPRSS2 and partially blocks the entry of SARS-CoV-2 into bronchial epithelial cells in vitro.

The first coronaviruses found to infect humans were called 229E and OC43, but they caused very mild infections, similar to the common cold. It was not until the outbreaks of SARS (severe acute respiratory syndrome) and then MERS (the Middle Eastern respiratory syndrome or camel flu) that it was appreciated that they could cause serious human infections. Those two infections are thought to have come from bats via civet cats and camels.

This awakening of interest in coronaviruses at different times is reflected in the pattern of publications about them. After the initial description of coronaviruses in 1968 there was a slow increase in the numbers of publications dealing with them, followed by two peaks, after two epidemics: the SARS coronavirus epidemic in 2003–4 and an outbreak of porcine epidemic diarrhoea in North America in 2013 (Figure 4). Identification of the first cases of MERS in Saudi Arabia in 2012, and then elsewhere (e.g. in South Korea in 2015), also caused by a coronavirus, may also have contributed.

I have previously highlighted the fact that the major peaks of interest in the coronaviruses have followed major infections in humans and animals. In my BMJ opinion column on 31 January this year, where some of this article has previously appeared. I wrote that I expected to see another peak in the numbers of publications following the current epidemic. My original graph ended with the 2019 figures. I have now added the latest numbers, from 2020, to the graph, which shows that my prophecy has already been fulfilled. More publications on coronaviruses have been logged in Pubmed in the first 12 weeks of 2020 than in any previous complete year. The difficulty in preventing and treating the infection is matched by the difficulty in keeping up with the published literature. 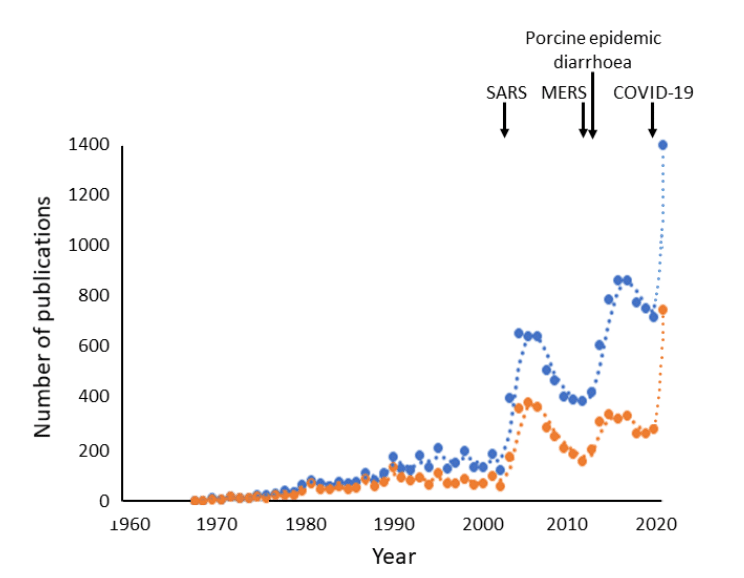 Figure 4. Numbers of publications with “coronavirus/es” as text words (blue) or in titles (orange) (source PubMed Legacy); each point represents one year, but the rightmost points cover only the first 12 weeks of 2020


Viral RNA can be detected by polymerase chain reaction (PCR, or quantitative PCR, qPCR, sometimes referred to as “real-time PCR” or RT-PCR, causing confusion with another term, “reverse transcriptase PCR”) (Figure 5). In this test, the virus’s single-stranded RNA is converted to its complementary DNA by reverse transcriptase; specific regions of the DNA, marked by so-called primers, are then amplified. This is done by synthesizing new DNA strands from deoxynucleoside triphosphates using DNA polymerase. Occasional false negatives have been reported. 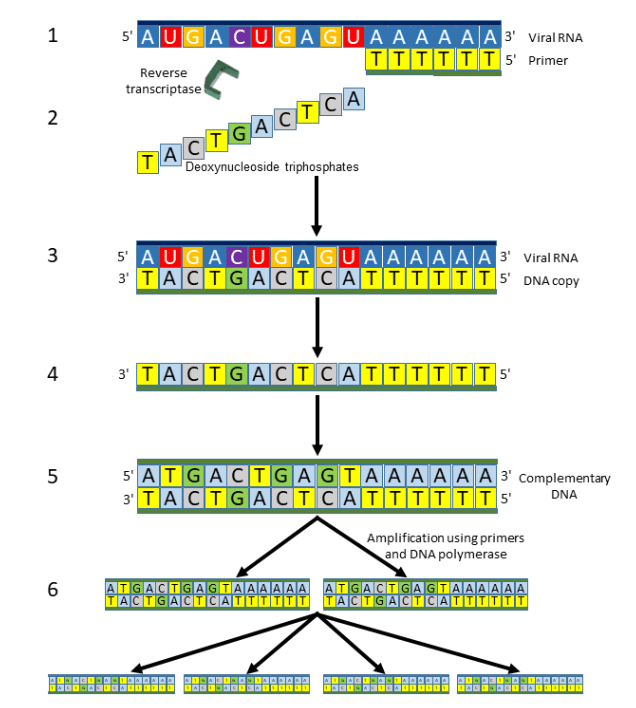 
An immunoassay has also been described, but it has a high false omission (or exclusion) rate (Table 1).


Table 1. Diagnostic features of an immunoassay for SARS-CoV-2 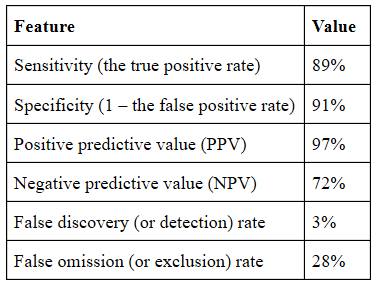 Efforts are currently being made to develop and implement an immunoassay for antiviral antibodies to determine whether infection has previously occurred.


Table 2. Taxonomy of coronaviruses that can cause disease in humans

Table 3. Some non-human mammals that can be infected by coronaviruses 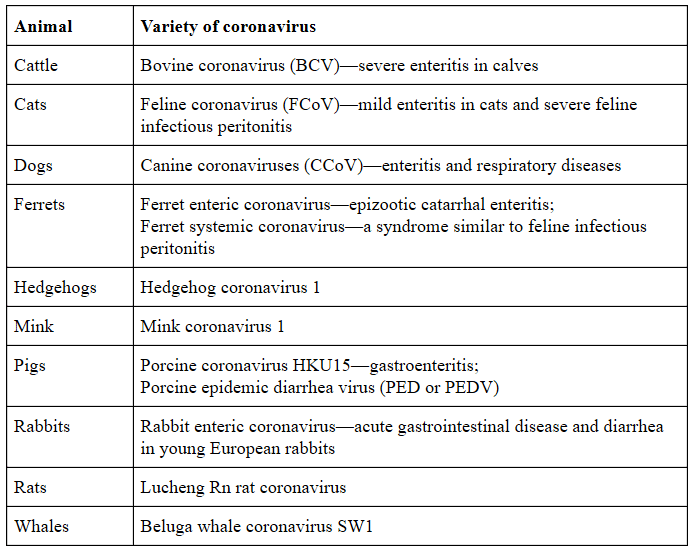 Table 5. Some coronaviruses carried by bats 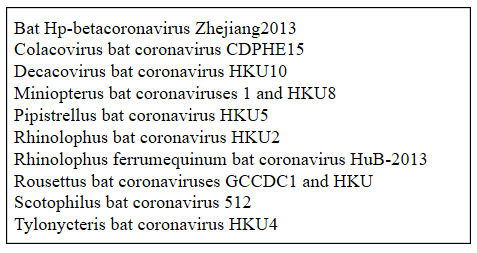 Appendix 2: Meanings of the word “corona”


I have listed the many different meanings of “corona” and some of its derivatives in Table 6 below.

Table 6. Different meanings of “corona” and some derivatives (based on definitions in the Oxford English Dictionary) 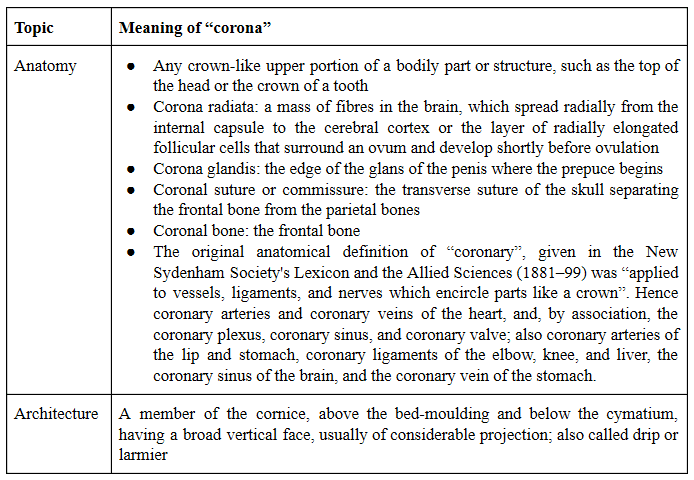 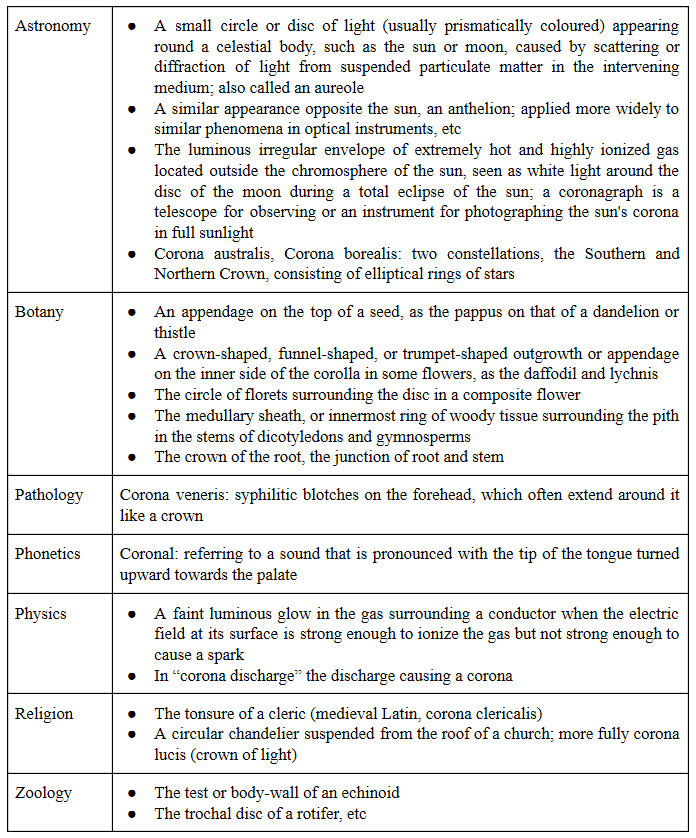