Question: Should smartphone apps be used clinically as oximeters? Answer: No. 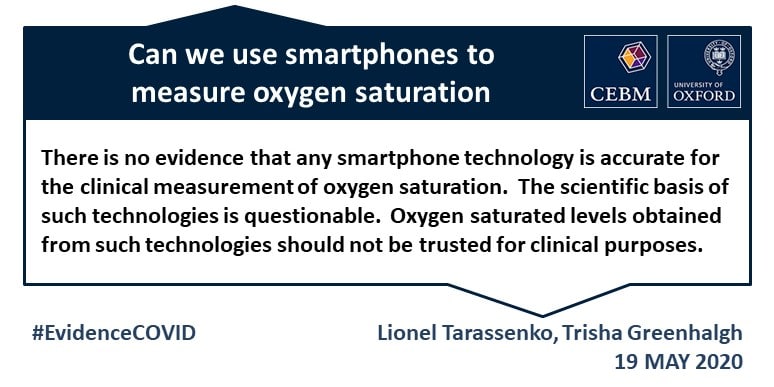 UPDATE
This review was updated on 19th May to take account of feedback received from academic colleagues. Whilst the feedback resulted in some minor changes to the text below, it does not change the conclusions. The feedback and our detailed response to it can be viewed here.

BACKGROUND
The COVID crisis is requiring us to manage patients with as little in-person contact as possible. The assessment of a patient with respiratory problems usually includes measurement of blood oxygen saturation (abbreviated SpO2), using a validated pulse oximeter. This is particularly important in unwell patients with COVID-19, since hypoxia is a serious warning sign for severe pneumonia.1 Whilst in-person assessment would use a standard pulse oximeter on the patient’s finger, few patients have such a technology in their homes. Various technology companies have developed smartphone apps that are marketed as accurate for measuring oxygen saturation.

A previous rapid review by our team on assessing shortness of breath in remote consultations2 turned up two academic papers which claimed to have validated smartphone technologies for measuring oxygen levels in the blood.3 4  Both papers (summarised in a table in the appendix), described comparison against a reference method (finger pulse oximetry or arterial blood gas). Whilst those papers included claims that there was good correlation between the smartphone reading and the reference standard, we were concerned about the risks of relying on these two small studies.2 We sought expert input from a Professor of Electrical Engineering (LT) who specialises in medical devices. This paper summarises Professor Tarassenko’s advice.

THE SCIENTIFIC BASIS OF OXYGEN SATURATION MEASUREMENT
Oxygen saturation is the fraction of oxygenated haemoglobin relative to the total haemoglobin (oxygenated + deoxygenated) in the blood.

The measurement of SpO2 with a pulse oximeter relies on the fact that the two forms of the haemoglobin molecule, Hb and HbO2, have light absorption properties which vary with wavelength in the visible and infra-red parts of the spectrum. It therefore requires the measurement of light transmission or reflection from a body segment such as a finger at two different wavelengths (usually in the red and infra-red).

CRITICAL APPRAISAL OF THE DIGIDOC APP TESTED BY TOMLINSON ET AL3
Despite the principles set out above, the DigiDoc app used in the Tomlinson study claims to measure oxygen saturation levels with just the flash light and camera of a smartphone. The app was reviewed in a blog on the Medpage Today website in 2015 (https://www.medpagetoday.com/blogs/iltifathusain/51888) under the headline “There are apps making unjustifiable claims, exposing patients to unnecessary risk”. The author concludes his review with the following words: “I’d urge DigiDoc to either take the app off the market until the company can support its claims or at least make significant changes to the app store description. In the meantime, clinicians […] should advise their patients not to use it.”

The claims made by DigiDoc are scientifically unsound. The app “measures oxygen saturation within 90-100% with an accuracy of 0-4 RSM compared to a medical grade oximeter”. It is not clear what RSM is (is it root root-mean-square error, RMSE?) but if we assume that they are claiming an error of ±4%, then a random number generator with a mean value of 95% and errors randomly distributed between -4% and +4% would give values between 91% and 99%.

Careful analysis of the paper by Tomlinson et al3 confirms the lack of scientific credibility for the DigiDoc app. Figure 2 in the paper (Bland-Altman plot for the SpO2 values for the DigiDoc app and the triage pulse oximeter) shows that all the readings, bar two, were between 97% and 100%, i.e. completely normal, with 95% Limits of Agreement at -4% and +3.5%. The authors observe that “reliability is low for the camera-based app, even when the two investigators tested the same patient within 1 to 2 min of each other”. Their statement that the difference between the camera-based app and the triage pulse oximeter is ±4 points should have led them to conclude, given that the x-axis in the Bland-Altman plot only extends from 96% to 100%, that the app was highly inaccurate.

CRITICAL APPRAISAL OF 2019 SCIENTIFIC ARTICLE BY DIGIDOC AND COMPUTER SCIENCE & ENGINEERING DEPARTMENT FROM SMU, DALLAS
On 19th December 2019, DigiDoc Technologies announced in a blog that a new scientific article (Measuring Oxygen Saturation with Smartphone Cameras using Convolutional Neural Networks) had been published in the November issue of the IEEE Journal of Biomedical & Health Informatics. The three authors of this paper are researcher Xinyi Ding and Associate Professor Eric C. Larson of Southern Methodist University, Dallas and the CEO of DigiDoc Technologies, Dr Damoun Nassehi.

The methodology has a number of limitations, some of which are pointed out in the paper by the authors, but which are laid out more explicitly here:

To summarise, the app cannot be used clinically because: (a) the training dataset does not appear to have included the full range of skin types (from Fitzpatrick skin type 1 to 6); (b) the training dataset covered a limited range of oxygen saturation values, mostly in the normal range from 95% to 100%, whereas pulse oximeters used clinically should cover the range from 70% to 100%; (c) there is no independent dataset on which the app has been tested.

In e-mail exchanges with Professor Tarassenko, Dr Larson makes a number of points:

CRITICAL APPRAISAL OF THE SAMSUNG APP TESTED BY TAYFUR ET AL4
The Samsung Galaxy series of phones had a red light emitting diode (LED) built into the phone in addition to the flash light and camera. There were no details released by the company of how its app used the LED to estimate oxygen saturation, but it appears from publicity material on YouTube that it worked via a single-wavelength measurement (albeit with a monochromatic light source, the LED) and therefore that oxygen saturation could not be accurately derived from it.

The methodology used by Tayfur and Afacan in their study is sounder than in the Tomlinson study because their reference device is an arterial blood gas (ABG) analyser. The Bland-Altman plot (Figure 4) in their paper shows that most of the oxygen saturation measurements from their Emergency Department patients were between 95% and 100%. For the few patients whose oxygen saturation measurements were between 85% and 93%, the difference between the smartphone estimate and the ABG device varied between -5.5% and +2.5%. In other words, the readings become less accurate as the patient becomes more hypoxic.

Disclaimer:  the article has not been peer-reviewed; it should not replace individual clinical judgement and the sources cited should be checked. The views expressed in this commentary represent the views of the authors and not necessarily those of the host institution, the NHS, the NIHR, or the Department of Health and social Care. The views are not a substitute for professional medical advice.

AUTHORS
Professor Tarassenko is Professor of Electrical Engineering at the University of Oxford.

Trish Greenhalgh is a Professor of Primary Care Health Sciences, co-Director of the Interdisciplinary Research In Health Sciences (IRIHS) unit, and joint module coordinator on the Knowledge Into Action (KIA) module of the MSc in Evidence Based Health Care.

We searched EMBASE and PubMed

Embase: We used the Thesaurus search builder with the terms “dyspnea” OR “hypoxia” OR “oximetry” AND “telemedicine” OR “smartphone” OR “telephone”