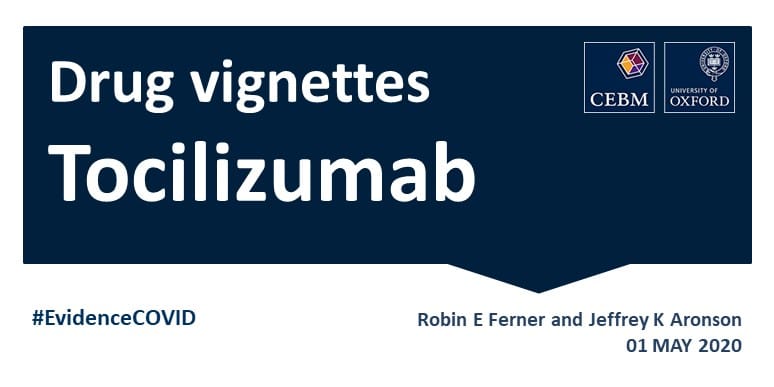 Patients with severe COVID-19 can develop cytokine release syndrome (“cytokine storm”) and are reported to have high circulating IL-6 concentrations. Tocilizumab is a recombinant humanized anti-human IgG1 monoclonal antibody directed against the interleukin-6 receptor (IL-6R). It has therefore been proposed to be of value in the management of severe COVID-19.

Mechanism of action
Tocilizumab binds specifically to both soluble and membrane-bound interleukin-6 receptor (IL-6R) with a pKd of 8.6 (i.e. Kd = 2.5 nmol/L). It is a competitive inhibitor of IL-6-mediated signalling.

IL-6 is a cytokine involved in haemopoiesis, acute phase reactions, and immune responses, such as T-cell activation and induction of immunoglobulin secretion. It is produced by T- and B-lymphocytes, monocytes, fibroblasts, and other cells. Excessive production of IL-6 is implicated in, for example, multiple myeloma and rheumatoid arthritis.

In an animal model, tocilizumab suppressed the development of arthritis and the synthesis of C-reactive protein (CRP).

Indications for licensed formulations
Tocilizumab is licensed in the UK and the USA, with some limitations, for the treatment of:

All of these indications are to treat chronic diseases, apart from the cytokine release syndrome, for which the FDA approved tocilizumab in 2017, on the basis of retrospective evidence of its effectiveness observed when it was used during prospective clinical trials of other interventions. It had previously been approved for the treatment of the chronic conditions listed above.Practical use in licensed indications
Tocilizumab is marketed in the UK by Roche Products Limited as RoActemra, in solutions containing 162 mg for injection (pens and syringes) and as a 20 mg/mL concentrate from which a solution for infusion can be prepared.

The effects of tocilizumab have been studied in several masked, controlled, randomized studies in rheumatoid arthritis. In a 52-week trial of nearly 800 patients, 20% of those treated with tocilizumab (8 mg/kg every four weeks) + methotrexate achieved a major clinical response (ARC 70), compared with 4% receiving placebo + methotrexate.

In a systematic review of 41 double-blind, randomized, controlled trials, non-controlled clinical trials, and open-label extensions lasting at least 6 months in patients with rheumatoid arthritis, tocilizumab monotherapy produced greater improvement than methotrexate monotherapy, as did the combination in patients who had failed to respond to methotrexate or anti-TNF therapy. However, the rate of serious infections was 4.7 events/100 patient-years of exposure in those who were given tocilizumab and there were also higher frequencies of neutropenia, thrombocytopenia, hyperlipidemia, and transaminase rises compared with placebo.

In rheumatic disease, tocilizumab is given by intravenous infusion once every four weeks, adjusted to the patient’s weight. The maximum recommended single dose is 800 mg. It can also be given by subcutaneous injection 162 mg once a week.

Contraindications and warnings in licensed use
Serious and sometimes fatal infections have been reported. The manufacturer therefore recommends that treatment should not be started during an active severe infection, or with conditions that can predispose to infections (e.g. diverticular disease, diabetes mellitus, interstitial lung disease). It is not clear how these restrictions would affect its use in acute infection with SARS-CoV-2.

Tocilizumab can also cause reactivation of tuberculosis and hepatitis B virus infection.

Hypersensitivity to tocilizumab or any of the excipients in the formulations is a contraindication. This is a typical blanket warning that is included in Summaries of Product Characteristics. However, acute hypersensitivity reactions to tocilizumab are not uncommon with repeated administration (see below).

Common adverse effects (between 1 in 10 and 1 in 100 people affected) include:

Hypersensitivity reactions occur in about 1.5% of patients with rheumatoid arthritis.

Drug-drug interactions
During cytokine storm drug metabolism by CYP isoenzymes is suppressed. Thus, successful treatment with tocilizumab may return to normal the metabolism of other drugs, such as methylprednisolone and dexamethasone.

The IL-6 concentration in 69 patients correlated with concentrations of CRP, ferritin, and D-dimers. An improvement in the radiographic appearance was accompanied by reduction in IL-6 concentration. However, since IL-6 clearance is mediated by the IL-6 receptor, blocked by tocilizumab, IL-6 accumulates in the serum during tocilizumab treatment, so it may not be a good marker of disease activity in tocilizumab-treated patients.

Experience with tocilizumab in virus infections other than COVID-19
IL-6 generated in damaged lung tissue has been implicated in the inflammatory myopathy that can occur in influenza A, and tocilizumab attenuated influenza-induced muscle dysfunction in experiments in mice.

The authors of a Japanese study of the course of influenza A infection in ten patients with juvenile rheumatoid arthritis receiving tocilizumab treatment concluded that “IL-6 inhibition by tocilizumab reduced inflammation associated with infection and resulted in mild symptoms during influenza.” Eight of the ten patients also received oseltamivir or zanamivir.

Experience with tocilizumab in COVID-19
Typical protocols include:

Non-randomized observations
Cao noted a small, apparently uncontrolled, Chinese trial of tocilizumab in which 21 patients with severe disease, including two who were critically ill, recovered. No other clinical data were provided.

A French patient with metastatic renal cell cancer developed fever, tested positive for SARS-CoV-2, and was treated with lopinavir–ritonavir. His condition deteriorated suddenly on day 8 of his illness, he was given two intravenous doses of tocilizumab 8 mg/kg six hours apart, and his clinical state improved rapidly.

A Chinese group reported the effects of tocilizumab in 15 patients, of whom seven were said to be critically ill. Eight patients were treated with methylprednisolone in addition. “Although TCZ treatment ameliorated the increased CRP in all patients rapidly, for the 4 critically ill patients who received only single dose of TCZ, 3 of them (No. 1, 2, and 3) still dead [sic] and the CRP level in the rest 1 patient (No. 7) failed to return to normal range with a clinical outcome of disease aggravation.” The authors reasonably concluded that, while a single dose of tocilizumab in combination with methylprednisolone failed to reduce disease activity, there was some suggestion that repeated doses of tocilizumab were clinically beneficial.

The effects of tocilizumab in addition to routine therapy have been retrospectively analysed in 21 Chinese patients with severe or critical COVID-19. The authors of a non-peer-reviewed account of the results, subsequently published, reported that within a few days fever abated and all other symptoms improved; 15 patients needed less oxygen intake and one needed none at all; lung opacities in CT scans “were absorbed” in 19 patients. The peripheral lymphocyte counts, which were below normal in 17 of 20 patients before treatment, returned to normal in 10 out of 19 by 5 days, and abnormally high C-reactive protein concentrations fell significantly in 16 out of 19 patients. These are apparently encouraging results, but the study was small and retrospective and there was no control group for comparison. In different parts of the paper the authors refer to either 20 or 21 patients; in the tables, the demographic data refer to 21, but the laboratory data refer to anything from 12 to 20 patients or do not specify; the results of oxygen therapy are described in 20 patients. We have not found a prespecified protocol.

The trial protocol, titled “A Study to Evaluate the Safety and Efficacy of Tocilizumab in Patients With Severe COVID-19 Pneumonia”, indicated that the intention was to recruit 450 patients, but the company statement does not give data on how many patients were recruited or how they were distributed between the active and placebo arms.

The specified primary endpoint was “Clinical Status Assessed Using a 7-Category Ordinal Scale [Time Frame: Day 28]”. The results posted on 29 July stated that the odds ratio for clinical improvement at four weeks did not differ significantly between treatments: odds ratio in favour of tocilizumab = 1.19 (95% Confidence Interval 0.81–1.76), and that mortality at 4 weeks was 19.7% in the tocilizumab and 19.4% in the placebo group (P = 0.9410).

* P=0.0370. “However, the difference cannot be considered statistically significant as the primary endpoint was not met.” Nor was any correction made for multiple comparisons.
†P greater than 0.05

They also stated that “In addition, the key secondary endpoints, which included the difference in patient mortality at week four, were not met; however, there was a positive trend in time to hospital discharge in patients treated with [tocilizumab]. The COVACTA study did not identify any new safety signals for [tocilizumab].”

These results do not change our conclusion, described under “Outlook” below.

The results of a study of the effects of tocilizumab in patients with confirmed SARS-CoV-2 infection and evidence of systemic inflammation have now been published. The Genentech-sponsored study was a randomized, double-blind, placebo-controlled trial conducted in seven hospitals in Boston, Massachusetts. The protocol was pre-published.

The patients were adults with symptomatic SARS-CoV-2 infection confirmed either by PCR or serum IgM assay, and who had an inflammatory response as demonstrated by one or more of:

provided they were not so severely ill that they required high-flow oxygen or ventilatory assistance.

Of adverse events, neutropenia was more common in the tocilizumab group. Selected results are shown in the Table.

The authors concluded that “Our data do not provide support for the concept that early interleukin-6 receptor blockade is an effective treatment strategy in moderately ill patients hospitalized with Covid-19.” We agree. We also agree that “The overall experience with interleukin-6 receptor blockade, however, underscores the point that any such approach must be subjected to randomized, blinded trials. Moreover, such investigations should be performed early in the course of evaluating each strategy, before the adoption of widespread use.”

Further evidence (added on 13 January 2021)
Further details of the REMAP-CAP results were published in preliminary form on 7 January 2021, and some information from the tocilizumab arm of RECOVERY was published on 8 January 2021.

REMAP-CAP used as a primary endpoint an ordinal scale that combined death in hospital (assigned a score of –1) and days free from organ support up to day 21. This was markedly different from the primary endpoint of RECOVERY, which was mortality at 28 days.

A Bayesian analysis of REMAP-CAP showed that both tocilizumab and sarilumab, another anti-IL-6 receptor monoclonal antibody, were significantly better than usual care.

At least 651/812 patients had received dexamethasone or hydrocortisone, and 265/807 received remdesivir

The RECOVERY investigators also reported a meta-analysis of six published randomized trials (Table 1), in which 1223 patients were given an anti-IL-6 receptor monoclonal antibody, mostly tocilizumab but alternatively, in some cases in REMAP-CAP, sarilumab; 884 were given some form of usual care. Treatment with an anti-IL-6 receptor antibody non-significantly reduced the odds of dying compared with usual care: absolute risk reduction 4.6%, Odds Ratio 0.83 (0.66–1.04), P=0.11. The result was dominated by the outcome in the REMAP-CAP trial. Neither adverse events nor any measures of heterogeneity were reported in the meta-analysis. Nor have any direct comparisons been made between the use of anti-IL-6 receptor antibodies with or without the use of a corticosteroid, such as dexamethasone, since the combination might be more effective than either used alone.

In contrast, the RECOVERY investigators have randomized over 2900 participants to tocilizumab or usual care, without detecting a clear signal that it benefits survival.

Outlook
Current evidence from randomized clinical trials on the efficacy of anti-IL-6 receptor antibodies in covid-19 is contradictory, and although it appears that overall there may be a small reduction in mortality, the results are not convincing. However, the reduction in duration of respiratory and cardiac support found in REMAP-CAP, and the pressure on intensive care beds in the NHS has encouraged the use of tocilizumab. The RECOVERY investigators will continue to recruit patients to the tocilizumab arm of the trial, and until their results become available, it would be preferable if eligible patients were recruited to the randomized trial.

Registered trials
We are currently (27 April) aware of 35 trials involving tocilizumab, either alone or in combination with other medications (registered in European and Chinese trials registries and clinicaltrials.gov). Of those, one is single-blind (investigator-blind) and four are double-blind. In all, 1590 participants are scheduled to be studied in the masked trials compared with 10,636 in the unmasked trials (15%).

Disclaimer: This article has not been peer-reviewed; it should not replace individual clinical judgement and the sources cited should be checked. The views expressed in this commentary represent the views of the authors and not necessarily those of the host institution, the NHS, the NIHR, or the Department of Health and Social Care. The views are not a substitute for professional medical advice.