What does RCGP surveillance tell us about COVID-19 in the community?

Verdict:
The current community transmission of COVID is low and not at epidemic levels. The rates are less than that of confirmed cases in the UK. This could be explained by asymptomatic people or those with mild infections not seeking out testing in primary care. The observed reductions in URTIs and LRTIs suggest that most of the effect on rates of transmission occurred through the encouragement of social distancing.

Influenza-like illness (ILI) rates in England and Wales peak at variable times between November and March.

The questions these data can answer are:

The figure shows that rates of URTI and LRTI have fallen significantly since 15th March when social distancing measures were introduced. Some of this fall would naturally happen at this time of year with the onset of spring.

Through Jan and February of this year, there was similar consultation rates of approximately 20 per 10,000 in Primary Care. These rates started to drop on the 15th of March. The trend in the data suggests that ARIs consult were displaced by COVID consults as shown in the figure, with a peak respiratory consults on the 15th of March.

There is a delay in reporting in the swab results that lead to fluctuations in the rates, particularly in the last week of reporting, but overall rates remain low. As more testing occurs you would expect more disease to be detected if it was circulating (see detection bias).

The RCGP surveillance has changed its outputs to confirmed, suspected or probable cases in the last week (see here). This has reduced the previously reported COVID-19 rates per 10,000 confirmed cases by about a factor of 10.

Do these rates constitute epidemic levels of community infection? Not at the moment.

An epidemic is declared if the rate of consultations for influenza-like symptoms in a sample of reporting by general practice exceeds 40 per 10,000 population in one week.

What does virology swabbing tell us?

Virology swabbing peaked in week 18 of 2020, The majority of samples remain for an unknown pathogen. COVID was first detected with viral swabs in week 9 (week ending 1st March) and peaked with 106 swabs in week 15. 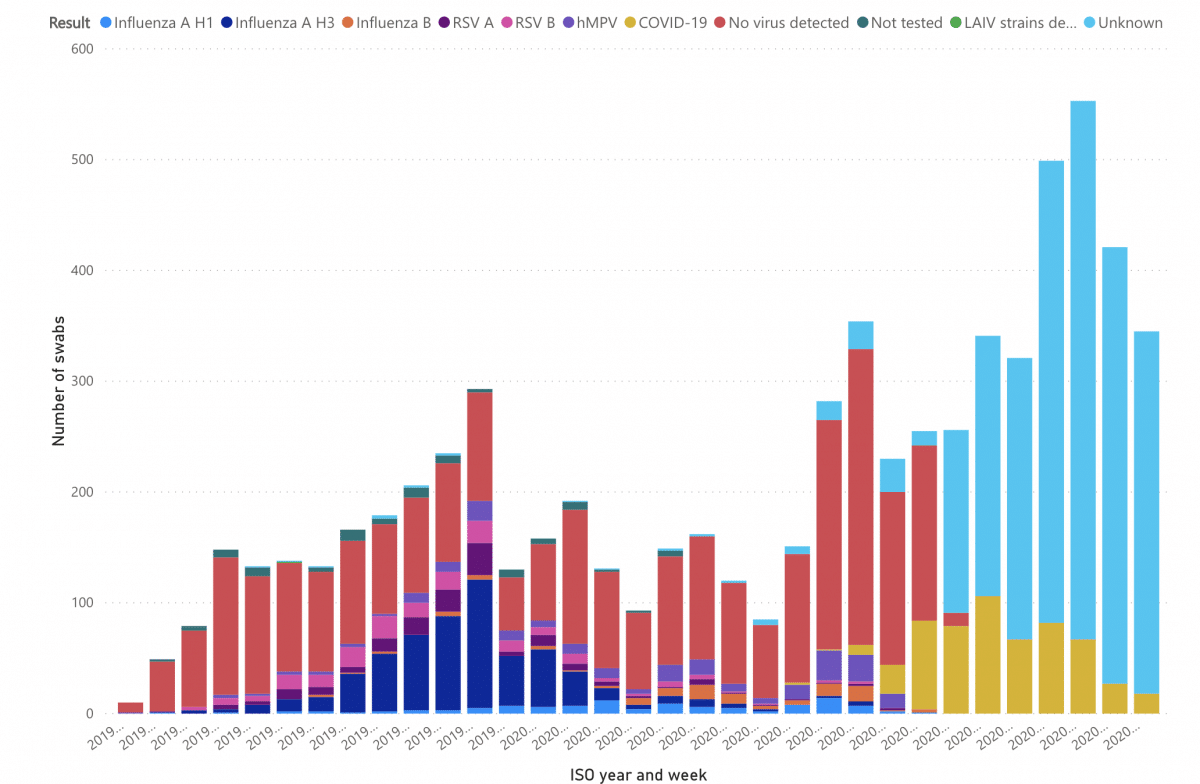 The explanations for these findings could be numerous: from contamination, to sample damage or unrecognised known agents, to looking for the most probable “culprits” (and not finding them). However, the presence of so many “unknowns” raises the possibility of the circulation of one or more co-agents.

This merits further investigation and explanation.  Circulating unknown co-agents cannot be dismissed and should be thoroughly investigated as a matter of urgency. If found to be an artefact, it should be discounted for.

The simple observation also shows how useful a primary care sentinel network can be. If we want a quick fix to know what is going on, we should look no further than investing in such networks.