Duration of infectiousness and correlation with RT-PCR cycle threshold values in cases of COVID-19 in England.

Duration of infectiousness and correlation with RT-PCR cycle threshold values in cases of COVID-19 in England. Jefferson T, Heneghan C.

The RT-PCR cycle threshold (Ct) values as a measure of SARS-CoV-2 viral load showed that the level of SARS-CoV-2 RNA in the Upper Respiratory tract was greatest around symptom onset, steadily decreased during the first 10 days after illness onset and then plateaued.

A stratified comparison of the severe cases over time showed a similar result.

Similar to Bullard and colleagues’ and Piralla’s findings there was a strong relationship between Ct value and ability to recover infectious virus. The estimated OR of recovering infectious virus decreased by 0.67 for each unit increase in Ct value (95% CI: 0.58–0.77). 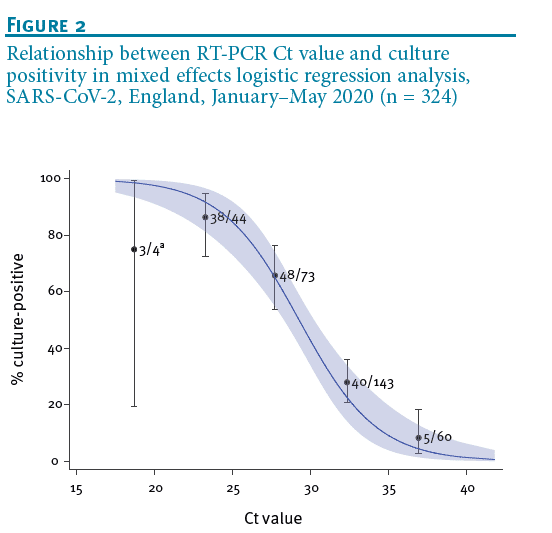 When symptom onset was based on symptom recall, median duration of virus shedding as measured by culture was 4 days (IQR: 1–8; range: −13 to 12).

Ten days after symptom onset, the probability of culturing virus declined to 6.0% (95% CI: 0.9–31.2%). Again this observation is in line with what we already know.

Table 2 in the paper reports the breakdown by age and positivity of 324 cases. There was no difference in culture positivity or ct values by age group although the younger age group 0-20 contributed only 14 cases to the dataset.

The study reports the testing for correlation between RT PCR results and cycle threshold (ct) and day of onset of symptoms and probability of culturing live SARS CoV-2 in 324 samples from 253 positive cases (from an original set of 754 URT samples from 425 symptomatic cases that tested positive).

All samples had to be related to a clear day of onset of symptoms and sample taking. Samples were nose, throat, combined nose-and throat and nasopharyngeal swabs nasopharyngeal aspirates either taken by staff or self-sampled nose swabs.  The PCR targeted the RNA polymerase gene called RdRp. Evidence of cytopathic effect in cultured Vero cells with the presence of SARSCoV-2 was confirmed by nucleoprotein staining by enzyme immunoassay on infected cells.

The authors specifically state that they cannot be absolutely certain of the circumstances of collection or symptom onset. However in the text they appear to contradict their earlier statement that all samples came from symptomatic cases reporting that the specimens came “from a range of clinical scenarios including community and healthcare worker surveillance, symptomatic persons tested as part of the early epidemic response and samples acquired in outbreak investigations. Selection of asymptomatic cases was through swabbing of contacts or facility/family/household testing in the context of outbreak investigations”.

This study is part of a growing body of evidence linking symptom onset, with PCR ct values and infectiousness