Quantitative monitoring of SARS-CoV-2 genomes in wastewaters may enhance surveillance intelligence of circulation at local or regional scales.

Viral genomes could be detected before the beginning of the exponential growth of the epidemic. As importantly, a marked decrease in the quantities of genomes units was observed concomitantly with the reduction in the number of new COVID-19 cases which was an expected consequence of the lockdown. 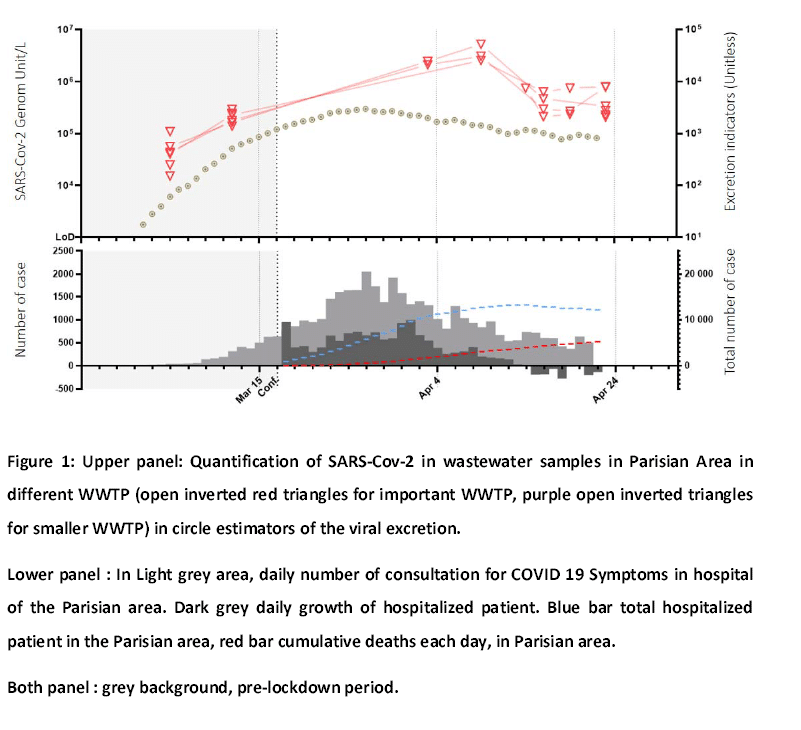 The study was designed to test the assumption that SARS-CoV-2 genomes in wastewaters correlate with the number of symptomatic or non-symptomatic carriers. The authors performed a time-course  quantitative analysis of SARS-CoV-2 by RT-qPCR in raw wastewater samples collected from three major wastewater treatment plants (WWTP) of the Paris area, serving more than 100,000 inhabitants. The study was conducted from 30 March to 23 April 2020, in the lockdown period in France which began on 17 March 2020. Samples were kept at 4°C and processed less than 24 hours after sampling.

Concentration and testing methods are described in detail (data not extracted here) and the authors estimated the total amount of viral RNA shed in stools in a given population based on the characteristics of the epidemic and what was known of the viral load from swabs taken from Covid-19 patients.

The study results fit well with those of other studies. No indication of the viability of viral RNA is reported.

This is an observational correlational study. The results need replicating with similar sampling and testing procedure.