Viable SARS-CoV-2 in the air of a hospital room with COVID-19. Jefferson T, Heneghan C.

Patients with respiratory manifestations of COVID-19 produce aerosols in the absence of  aerosol-generating procedures that may contain viable SARS-CoV-2.

The study reports the collection and testing of air samples from the room of two COVID-19 patients, one of whom had an active respiratory infection with a nasopharyngeal (NP) swab positive for SARS-CoV-2 by RT-qPCR (Patient 1, who also had cardiac disease) and Patient 2 who was recovering from a stroke. The authors used VIVAS air samplers operating on a gentle water-vapor condensation principle from room air and subjected to RT-qPCR and virus culture. The technique does not damage the virus and its replicability. They also sequenced genomes of the SARS-CoV-2 collected from the air and of virus isolated in cell culture from air sampling and from a NP swab from a newly admitted patient in the room were sequenced.

Air samples were collected in a room that was part of a designated COVID-19 ward. The room had six air changes per hour and the exhaust air underwent triple filter treatment and UV-C irradiation prior to recycling 90% of the treated air back to the room. 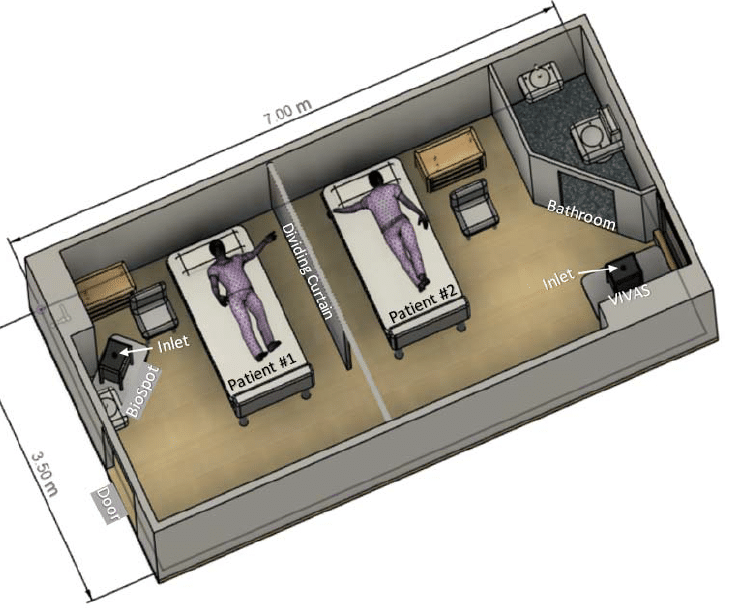 This a single case report which needs replication. Sizing of particles is not mentioned. No great description of patients, no samples from surfaces were taken.

This is a case report of two patients and lack of protocol and possible ambulant patients within the isolation room. Patient 1 could have walked past patient 2 (who was originally negative after an initial positive, had a stroke and was in the process of being discharged) and coughed near the sampler and we have no idea of his position in relation to the air sampling runs. The distances reported in the study are not verifiable and the cycle thresholds are not reported which is a lost opportunity given their possible relationship with culture of viable viruses.