VERDICT
The hypothesis that the 4-aminoquinolines chloroquine and hydroxychloroquine may be beneficial in the treatment of COVID-19 is a weak one, based on poor mechanistic reasoning and inconsistent results of studies in vitro, in laboratory animals, and in humans.

It is likely that even if chloroquine and hydroxychloroquine are effective in COVID-19, the beneficial effects will be small.

The risks of adverse reactions to these drugs may be increased in patients who are acutely ill with severe COVID-19, in many of whom high doses are being used.

Macrolide antibacterial drugs, such as azithromycin, clarithromycin, erythromycin, and telithromycin, interact adversely with the 4-aminoquinolines, since both types of drug prolong the electrocardiographic QT interval. The combination increases the risk of the serious ventricular tachycardia called torsades de pointes, which is often fatal. Macrolide antibacterial drugs should be avoided in patients taking chloroquine or hydroxychloroquine. Other drugs that prolong the QT interval should also be avoided or used with care.

BACKGROUND
We have previously expressed concerns about the widespread use of the 4-aminoquinolines chloroquine and hydroxychloroquine in the treatment of COVID-19. Our reasons were as follows:

1. Weak evidence for the hypothesis of efficacy
In cell cultures and animal studies, the effects of 4-aminoquinolines on viruses from avian influenza virus (H5N1) to Zika have been inconsistent.

Translation of beneficial effects from animals to humans has also been inconsistent. For example, chloroquine inhibited dengue virus in some cell cultures but failed to shorten the illness in a randomized study of 37 patients, although it improved some symptoms. And although laboratory studies suggested activity against influenza virus, chloroquine did not prevent infection in a large randomized trial.

Such inconsistent laboratory and clinical evidence is partly due to the complex pharmacokinetics of 4-aminoquinolines, both chloroquine and hydroxychloroquine, making it difficult to extrapolate from cell culture experiments to human use and difficult to find satisfactory dosages during an acute infection.

The null hypothesis to be tested is that the 4-aminoquinolines are not efficacious in COVID-19. The past failures give no confidence in the alternative hypothesis, namely that these drugs will benefit patients with COVID-19, or indeed any new acute viral infection.

2. Small likelihood of benefit
The mechanism of action of the 4-aminoquinolines is not known, despite many years of use as antiplasmodial drugs in malaria and in conditions such as rheumatoid arthritis and systemic and discoid lupus erythematosus. The most commonly cited hypothesis for their antiviral action is that they are weak bases and increase endosomal pH in host intracellular organelles, inhibiting autophagosome-lysosome fusion and inactivating enzymes that viruses require for replication. They may also affect glycosylation of angiotensin converting enzyme-2 (ACE-2), the receptor that SARS-CoV-2 uses as one of two mechanisms to enter cells; there is no evidence that they alter the viral membrane fusion mechanism.

However, even if these mechanisms are relevant to SARS-CoV-2, the 4-aminoquinolines are unlikely to do more than partially reduce viral invasion of cells and intracellular replication, not abolish it completely. At best this might be expected to delay the onset of the illness and perhaps shorten its duration.

Our previous concerns were borne out by the results of early clinical studies, which showed either little or no beneficial effect. However, these studies were generally small and of poor quality, and mortality was not a primary outcome. The results of properly masked randomized controlled trials were awaited, and still are.

3. The risk of adverse drug reactions
It is often claimed that we know all about how safe the 4-aminoquinolines are, because they do not often cause serious adverse reactions when they are used for their licensed indications, and are therefore unlikely to cause serious adverse reactions when used to treat acute viral infections. This is an unjustifiable assumption, for two reasons.

First, there is no guarantee that, because a drug is safe at one dose, it will be safe at a higher dose. The Summary of Product Characteristics (SmPC) for Plaquenil (hydroxychloroquine sulfate, Zentiva) recommends that the dose should not exceed 6.5 mg/kg/day and will be either 200 or 400 mg/day. The adult dosage regimen in the RECOVERY trial is 2400 mg in the first 24 hours followed by 400 mg 12-hourly for 10 days or until discharge from hospital, which could be longer. In 45 registered trials of hydroxychloroquine in COVID-19 for which enough information is given for calculations to be made, the average daily dose over the period of treatment is over 400 mg and in some as high as 1200 mg/day.

Secondly, the absence of serious adverse reactions during treatment of a chronic condition is no guarantee of freedom from adverse reactions when treating an acute severe infection. For example, the 4-aminoquinolines can rarely cause seizures and so can COVID-19. We do not know if the risk of drug-induced seizures is therefore increased when the drugs are used to treat COVID-19. 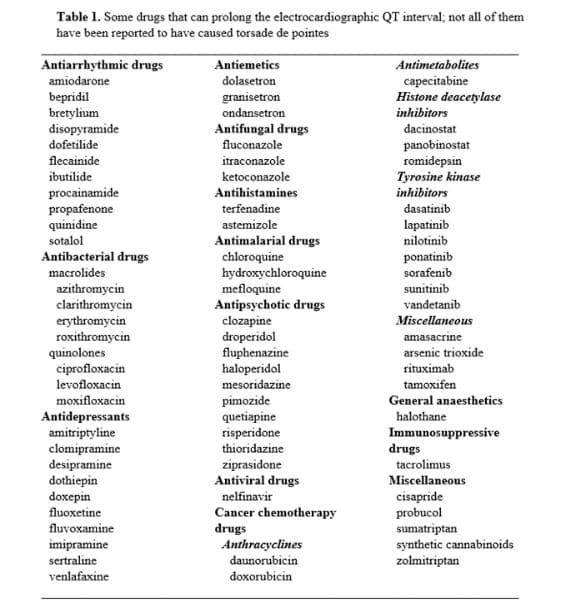 When the QT interval is prolonged in this way there is an increased risk of the polymorphous ventricular tachycardia called torsades de pointes, which can be fatal. The risk of torsades de pointes is increased in the presence of hypokalaemia, to which patients with COVID-19 are susceptible. The risk of azithromycin-induced prolongation of the QT interval is also increased in elderly people, who are at increased risk of developing severe COVID-19, and in patients in intensive care units, where they are likely to be treated.

Several studies of the combination of azithromycin + hydroxychloroquine in COVID-19 have shown an increased risk of cardiac arrhythmias.

A recent registry study of data from 671 hospitals worldwide in more than 96,000 patients with COVID-19, of whom 16% been treated with a 4-aminoquinoline, reported that mortality was 7530/81144 (9%) in patients who received neither drug and 3168/14888 (21%) in those who received either chloroquine or hydroxychloroquine; those who received azithromycin or clarithromycin in addition to a 4-aminoquinoline were at higher risk of dying (2318/10004, 23%) than those who received a 4-aminoquinoline alone (850/4884, 17%). Worrying though these data are, they do not constitute definitive evidence of an unfavourable benefit to harm balance, since treatments were not randomly allocated and confounding could have occurred. Furthermore, since the data were published doubt has been cast on their provenance and accuracy, which await confirmation.

Note added on 4 June: The authors have now retracted their paper. They were unable to complete an independent audit of the data underpinning their analysis and have therefore concluded that they “can no longer vouch for the veracity of the primary data sources.” The retraction notice can be found at https://www.thelancet.com/lancet/article/s0140673620313246/.

Current trials involving the 4-aminoquinolines
The World Health Organization has temporarily halted the hydroxychloroquine arm of its Solidarity trial, pending analysis of the data so far obtained.  The Oxford-based PRINCIPLE trial in UK general practices also suspended the hydroxychloroquine arm, the trial continues to evaluate other drugs.  The Oxford–Brighton COPCOV study has been halted, under guidance from the UK regulator, the Medicines and Healthcare products Regulatory Agency (MHRA), as reported in the medical press.   At the same time, the MHRA has reportedly said that it agrees with a statement from the investigators of the Oxford-led RECOVERY trial, that “the data [analysed by an independent committee] provide reassurance that continued enrolment into the hydroxychloroquine arm is safe and that we should press ahead with getting a reliable answer on hydroxychloroquine”.

Note added on 27 June: On 26 June the MHRA announced that it had “given the [COPCOV] clinical trial the green light to recruit more participants at the request of the COPCOV trialists, who are studying the use of hydroxychloroquine in preventing COVID-19. At the same time, the MHRA issued a statement reminding prescribers that “Chloroquine and hydroxychloroquine are not licensed to treat COVID-19 related symptoms or prevent infection” and that “until we have clear, definitive evidence that these treatments are safe and effective for the treatment of COVID-19, they should only be used for this purpose within a clinical trial.”​

Conclusions
Many trials of the 4-aminoquinolines are currently being conducted globally. Many of them are unmasked, and many of them involve the use of high doses. It is therefore important to establish the benefit to harm balance in high-quality trials.

Patients who are given either chloroquine or hydroxychloroquine should not also be given any other medicines that prolong the QT interval. If such combinations are unavoidable, the electrocardiogram should be carefully monitored for evidence of QT interval prolongation.