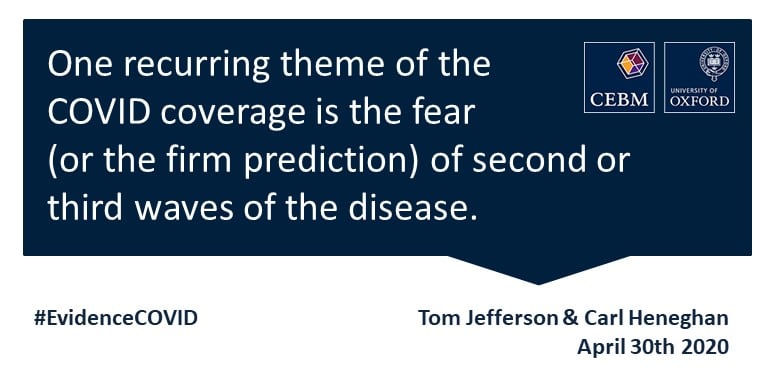 One recurring theme of the COVID coverage is the fear (or the firm prediction) of second or third waves of the disease. We must “prepare for the second wave of COVID.” The UK Prime Minister,  speaking outside Downing Street on Monday morning, urged the UK people to continue adhering to the “tough measures” to avoid a “second spike” of COVID-19.

The second or third waves are often portrayed as very likely, inevitable or probable by modelling studies.

Waves, as in the sea, are usually preceded by a trough, but this visual analogy is hardly ever mentioned; nor the appropriateness of forecasting waves in a coronavirus pandemic. We reviewed the evidence (Search strategy at the end) underpinning second-wave theory

History is littered with references to respiratory virus pandemics or serious epidemics. However,  we only used those episodes for which reasonable contemporary accounts exist.

These ten outbreaks start with the 1889-1991 pandemic and end with the current pandemic. Their salient known features are summarised in the table.

Key: * = causality by influenza viruses was inferred by serological studies in survivors;

The table schematically summarises what is known about the outbreaks. With the exception of SARS-CoV-11 and SARS-CoV-2, all the other outbreaks have been attributed to influenza A viruses by either positive laboratory findings or inferred by antibody profiles reconstructed by serological surveys of living survivors.

Most of our thinking on second-wave theory arises from the 1918-20 “Spanish Flu” that infected 500 million people worldwide and reportedly killed an estimated 20 million to 50 million. By August of 1918, a deadlier strain of the “Spanish flu” emerged. When reading the “Spanish flu” story we must remember the role of military censorship. The identity of the index case remains a mystery. A US army camp in Kansas, a British camp at Etaples in France and even German troop concentrations for the spring offensives are possible locations. Censorship is also responsible for the sobriquet “Spanish” attached to the pandemic. As Spain was not in the war and had no censorship, all cases appeared to originate from Spain –  an example of ascertainment bias.

There are several additional problems in reviewing and interpreting this evidence. These range from recalling the sequence of faraway events, to explaining influenza viral co-circulation with no historical precedent, to identifying circumstances favouring the spread. The true number of deaths from “Spanish flu” is highly uncertain; it is not clear, for instance, if they were actually caused by influenza, which was not a reportable disease at the time and what role bacterial superinfection played – estimates are, therefore, educated guesses.

“Spanish Flu” directs much of the modelling responses to pandemics. There are, however,  no reliable viral samples from the outbreak that confirm any of the hypotheses related to this episode, There were two RNA sequences retrieved from historical specimens from two different victims but they show no particular characteristics that could explain virulence.

The term “wave” comes from the 1889-92 outbreak that had different phases supposed to have occurred over multiple years.

For influenza, school vacations are thought to be one of the mechanisms for reduced transmission. Contact reductions in the summer vacation of the 2009 outbreak, led to the summer ‘trough; before the infection picked up again – the ‘wave’ – into the winter.

Both the 1918 and 2009 outbreaks are similar in that they started in the ‘spring wave’ and went on into the summer. These spring/ summer delays in the initial numbers infected are thought to have little impact on the overall attack rate.

It has been suggested that previous pandemics are characterized by waves of activity spread over months. However, there is inconsistent evidence of such patterns across all of these eight influenza epidemics and pandemics. As they go on to quickly exhibit seasonality in the ensuing years and along with other acute respiratory viruses tend to favour seasonal cold-weather patterns of circulation

“Waves” imply a lack of viral circulation which is probably an illusion. It is possible that some of the secondary “waves” or phases were caused or favoured by co-circulation of other microorganisms. Waves are also visible and mostly rhythmical. There does not appear to be any pattern or rhythm to the epidemics summarised in the table and their comings and going are only visible because of the effects on the human body and their impact on society.

Furthermore, none of these agents was able to infect an entire population at once.

So far coronaviridae associated with the influenza like-like illness display seasonal circulation and like other agents such as rhinoviridae and influenza are causes of influenza-like illness. Different types of coronaviruses coexist in most winter seasons in countries such as the UK, and the current outbreak is associated with latitude and COVID deaths and cases in the Northern Hemisphere.  However, MERs is mainly associated with contacts with camels and SARs 2002-03 has not been identified since.

The theory of pandemics is murky. The best known is the cyclical theory based on influenza occurrence. This foresees cycles of infection when the natural immunity to the previous agent dies out with the passing away of survivors. This cycle up until recently was thought to span 70 years approximately. However, this theory does not fit all the evidence and the rise of other microbiological agents such as coronaviridae imposes a radical rethink and proper investigation of the ecology of the lesser-known respiratory agents.

The disappearance of a respiratory virus for decades with a sudden reappearance, in some cases virtually unchanged requires serious investigation. Meanwhile, the chaotic nature of epidemics and their consequent disruption should lead us to be cautious about forecasting the future.

We do not know for certain whether COVID will recur in phases, or sporadic outbreaks or disappear altogether.

Making absolute statements of certainty about ‘ second waves’ is unwise, given the current substantial uncertainties and novelty of the evidence. As we cannot see the future and our understanding of this new agent is in its infancy we think preparedness planning should be inspired by robust surveillance, the flexibility of response and rigid separation of suspected or confirmed cases. These measures should stand for all serious outbreaks of respiratory illness.

Better evidence and better understanding are needed. Covid 19 will focus our minds.

Tom Jefferson is an Epidemiologist. Disclosure statement is here

Disclaimer: the article has not been peer-reviewed; it should not replace individual clinical judgement and the sources cited should be checked. The views expressed in this commentary represent the views of the authors and not necessarily those of the host institution, the