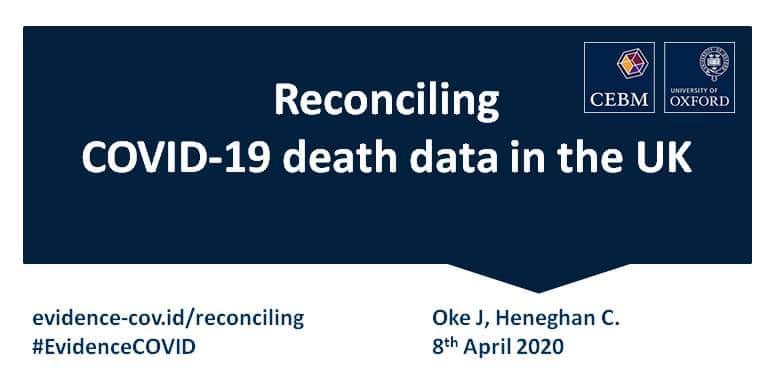 How many people have died from COVID-19 in the UK?  You’d think this was an easy question to answer, but you would be wrong. There are numerous places in which you can find this data, and they don’t always give the same answer.

Regular updates of COVID-19 cases and deaths globally and by individuals country are compiled by Johns Hopkins University, the World Health Organization (WHO) and the European Centre for Disease Prevention and Control (ECDC) to name but a few.

In England and the UK, there are three main sources of death data:

Data for England are combined with death counts provided to the Department of Health and Social Care – GOV.UK  (DHSC) by the devolved administrations.  These are published for the UK at 2 pm every day; Deaths outside NHS services are not included.

The Public Health England dashboard (www.arccgis) extracts data at 5 pm each day and reports the following day, so numbers visible on the 8th April are current for the 7th of April.

NHS England releases data at 2 pm each day and reports daily count up to the previous day as well as a total figure.

The ONS mortality statistics are compiled from information supplied when deaths are certified and registered as part of civil registration and so released much later. This is because deaths can be registered five days after the death date (longer, if it is referred to a coroner for investigation).

As of the 31st March, the ONS issues a report every Tuesday, and their data includes cases from outside hospital and cases where COVID-19 is suspected, but no formal diagnostic test has taken place. ONS reports include data a week before the publish date and daily death numbers for the end of the previous week. Hence the report published on the 7th April included deaths up to the 27th March but also includes deaths registered by the 1st April.

What makes tracking up to date daily death data particularly tricky is that counts get revised daily. When the latest number of deaths are announced, numbers for all previous days are revised upwards with the most recent days often given the large adjustment.

For example, the NHS announced that a further 828 people, who tested positive for the Coronavirus (COVID-19) have died, bringing the total number of confirmed reported deaths in hospitals in England to 6,483 (April 8th). You might think that this means that 828 people died the day before, but this isn’t what is reported.

The data shows how the 828 deaths on the 8th of April are distributed amongst the previous days. (See  here).

Table of the date of 828 deaths reported for the 8th April.

Historical data for the UK can be extracted from the PHE dashboard but this will not match either the NHS data nor most of the ONS data. For example, compare the cumulative count of deaths for the 31st of March 2020.

For the 27th March, the figures from the Public Health England dashboard severely underestimate the death figures for England. The most recent data from Public health England and NHS suggest the gap has narrowed considerably.

We have plotted ONS, PHE and NHS data over time to illustrate this. 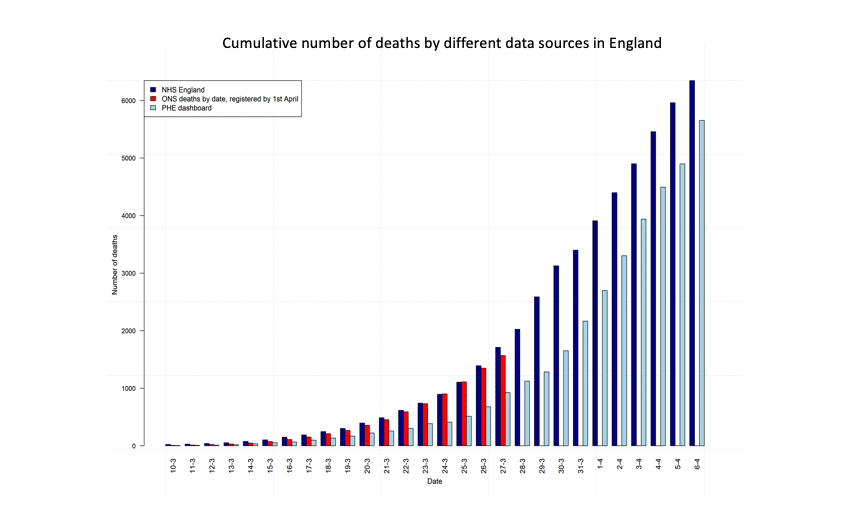 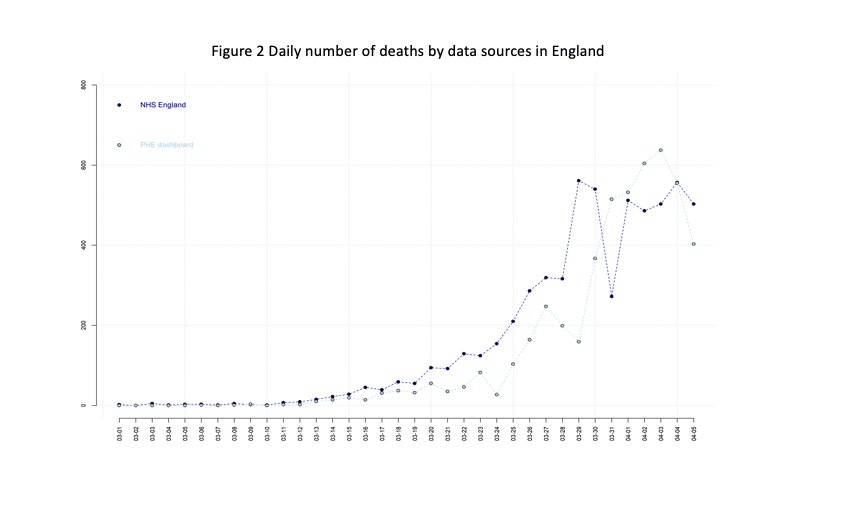 Revising of previous counts makes it difficult to judge whether the deaths are falling over time in the short term.  The media should be wary of reporting daily deaths without understanding the limitations and variations in different sources. We recommend  NHS England and PHE prioritise the date of death, which will provide a better understanding of the peak deaths in the pandemic. The current data tentatively suggest a slowing in the rate of deaths and flatlining consistent with hitting a peak. However, inaccuracies in the data gives rise to considerable uncertainties.