Probable Hospital Acquired infections in England remain persistently high: currently, 17.6% of COVID-19 infections fit the NHS England definition of probable healthcare-associated infections (HCAIs). These rates have been as high as 25% in the North West and continue to climb in the North East and Yorkshire. 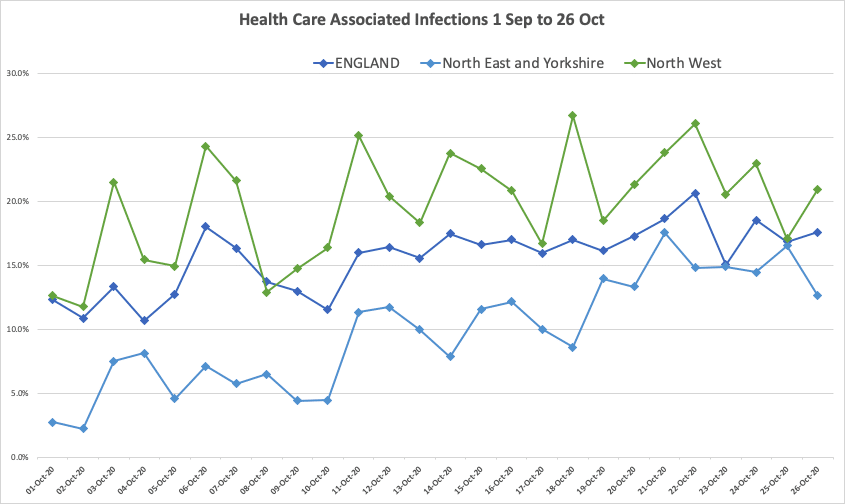 In terms of the number of hospital outbreaks reported by Public Health England in week 44 (between 19 and 25 October 2020), 71 incidents were reported where 59 had at least one linked case that tested positive for SARS-CoV-2. This result is stable compared with last week’s figure of 60 outbreaks.

We identified 11 news reports in October alone (see the table at the end of the article for the full details).

In Swansea there were 192 cases linked to hospital outbreaks, with 12 confirmed deaths linked to hospital infections in the Cwm Taf Morgannwg health board area, bringing the total so far to 69 at its three general hospitals in Llantrisant, Merthyr Tydfil and Bridgend. Overall, Cwm Taf Morgannwg health board has now reported 366 cases linked to outbreaks at the three general hospitals and community hospitals in Rhondda and Maesteg. Politicians have demanded a probe into outbreaks at the board’s hospitals, after 57 deaths related to outbreaks.

In Scotland, up to four people died after a Covid-19 outbreak on a cancer ward at an Edinburgh hospital.

In England, South Tees Hospital Trust has had seven separate outbreaks of Covid-19. An inquiry was launched in Tameside as in a small district hospital more than a third of all coronavirus deaths among inpatients in England occurred in a week. It has been found that 150 patients caught coronavirus in hospitals operated by University Hospitals Bristol and Weston Foundation Trust, of which a third died. This itself makes up almost a third of the total of 154 deaths in this trust over the course of the entire pandemic so far.

Although specific death rates linked to the Tameside outbreak are unavailable, we can assess the impact by applying a method previously used for estimation of the case fatality rate. Taking all areas in England with over 500 cases at risk for weeks 37-40, the case fatality rate in Tameside stands out as a clear outlier, with this value twice as high (or over three percentage points higher) than the local authority with the next highest death rate. 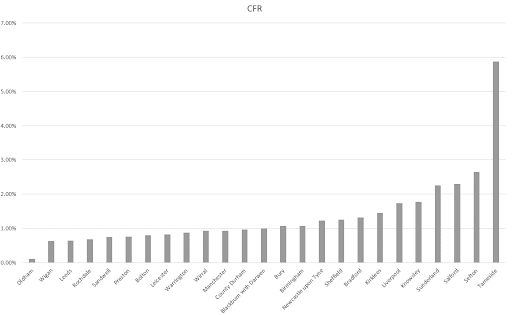 Liverpool University Hospitals NHS Foundation Trust has also exhibited a growing problem with probable HCAIs. While the trust continues to show persistently high total numbers of new patients in hospital with COVID-19 – a 7-day average of around 40 per day – admissions from the community have slowly fallen from a peak of around 31 per day on the 7th October. This general slow fall in community admissions has been masked in the aggregate, however, by an increase in probable HCAIs that began in early October, and peaked at around 13 per day in the most recent week of reporting. In the last week of reporting, probable HCAIs made up 27% of all new patients in hospital with COVID-19. 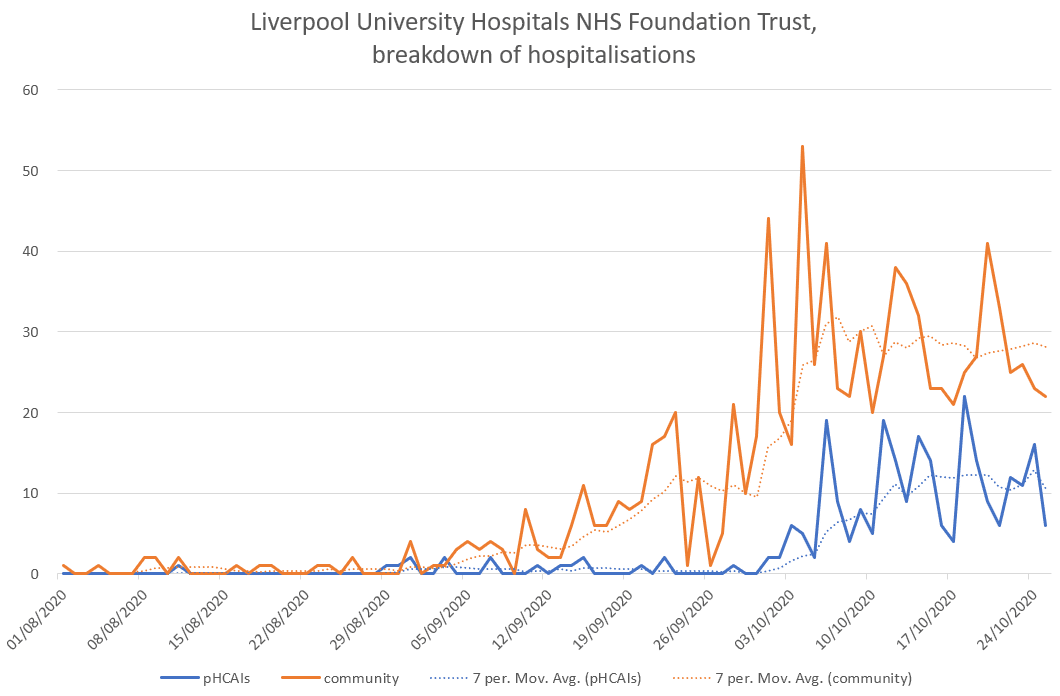 A study led by King’s College London estimated that at least one-eighth of COVID-19 hospital patients contracted the virus whilst already in hospital. The majority had already been in hospital for a long time. The study used a definition of hospital-acquired infection (HCAIs) occurring 15 days after admission with likely underestimation of the true numbers of HCAIs, which could be as high as 23%.

On 24 June, NHS England sent a letter requiring further action of all NHS Trusts and Foundation Trusts Strict application of the UK recommended Infection Prevention and Control Guidance was the main plan. This includes all staff in a hospital wearing a surgical face mask when not in personal protective equipment or in a part of the facility that is COVID-secure, and visitors and outpatients wearing a form of face covering. The guidance is set out here.

Tom Jefferson is a senior associate tutor and honorary research fellow, Centre for Evidence-Based Medicine, University of Oxford. The disclosure statement is here.

Disclaimer: the article has not been peer-reviewed; it should not replace individual clinical judgement, and the sources cited should be checked. The views expressed in this commentary represent the views of the authors and not necessarily those of the host institution, the NHS, the NIHR, or the Department of Health and Social Care.Most viewed